Serious cardiac arrest cases could be avoided, once persons can identify the symptoms of a heart attack. This was disclosed by the Minister of Public Health Volda Lawrence during a visit to the Cardiac Intensive Care Unit (CICU) housed at the Georgetown Public Hospital Corporation (GPHC). 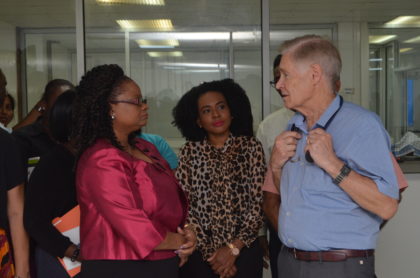 Co-Director of GPACC Programme Dr. Wayne Warnica told Minister Lawrence that cardiac arrest cases are often misdiagnosed. “One of the problem is that people get their first heart attack which they choose to stay home or told to stay at home so it is not investigated however when they get the second heart attack they are brought to us and their vertigos are in bad condition,” Dr. Warnica explained.

The Public Health Minister said that she is glad that the programme was implemented at the hospital especially at the high proficiency level through the accommodations made by the hospital administration.

“I believe that we can use that as role model for other aspects of health within the Georgetown Public Hospital Corporation (GPHC) and so the board and the Ministry of Public Health along with the technical persons to work along,” Minister Lawrence added. The Public Minister said that the Health Ministry has viewed that there  are some issues in the health system which needs to be addressed especially the shortage of nurses.

Minister Lawrence noted that there are also discussions to address the aftercare of patients which is important, since there are numerous persons from the 10 administrative regions who are treated at the tertiary institution.

The Public Health Minister highlighted that she hopes to work with the committee that has implemented Dr. Yesu Persaud Medical Centre to execute the same at the GPHC compound at the earliest since, “we believe that such of a facility will enable the hospital and its staff along with the university students to benefit more from what is being done here, especially if there is a larger theatre they can be part of the medical meetings”.

Additionally, the GPACC Programme Co-Director said that there is a need to educate the residents of Guyana about the symptoms of heart attack especially the establishment of an action plan should they experience a heart attack.

GPACC was made possible through collaboration among the Ministry of Public Health, GPHC, and the University of Calgary in Canada. The programme services include a heart failure clinic, cardiac catheterization, electrocardiogram or ECG, stress testing echocardiogram, and angiogram among others.