This was revealed by the Minister of Public Infrastructure, David Patterson at the commissioning of the West Coast Demerara Fourth Road Project on July 11. According to the minister, the region has been earmarked for the establishment of renewable energy technologies in the coming years. 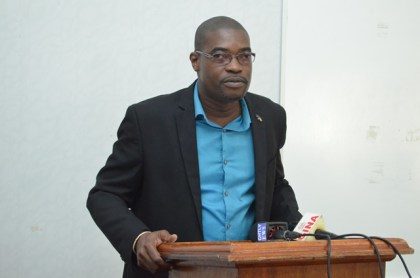 “In the latter half of 2018, the government will continue to install reconnected solar PV systems in five locations in Region Three. In addition to the eight buildings done during 2017.”

Minister Patterson added that “this will potentially add to the ongoing initiatives on which the government have embarked, in promoting green and clean energy.” He also disclosed some updates in the region.

“The Energy Efficient Programme that has commenced installation of lights in occupancy centres in 2017 will continue in 2018 with the replacement of fluorescent lamps with LED lamps at all schools and hospitals. This energy efficiency drive extends to street lighting, as over 792 street lights are expected for the commencement of installation by the end of 2018. These will be done in two phases.”

Forty-seven of these new LED lamps are earmarked for Leguan and thirty for Wakenaam, in keeping with the government’s commitment to bring new renewable lighting to the area.

There is also the ongoing project for the installation of 90 new LED lamps between Crane and Ruimzegt, which will further be complemented later this year with approximately 140 lamps between Vergenoegen and Hydronie on the West Coast of Demerara.

When completed, Canal Number One and Two roads will be fitted with approximately 120 LED lamps in 2019.