Relief is rapidly on its way for Sophia residents as the Ringroad project moves towards completion. Minister within the Ministry of Public Infrastructure, Annette Ferguson said the works which began in December 2015 are almost completed. She noted that the project will give the residents value for money since it is being carried out to international standards..

Speaking with the Government Information Agency (GINA), Ferguson said that from A Field to B Field of the Ringroad project is 80 percent completed. That section of the contract was awarded to Ivor Alleyne for $62M. Culverts are completed while placement of crusher run is ongoing. 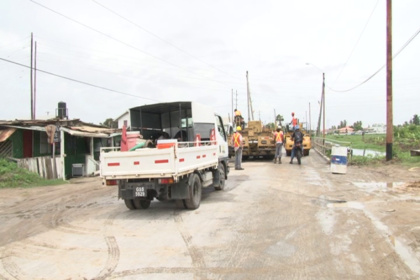 Ongoing works at A Field Sophia

Further at the B Field to C Field section, works are 85 percent completed. That contract was awarded to V. Dalip Enterprise for $55M. The concrete box culvert and other road works are completed while the final layer is yet to be completed by the Ministry of Public Infrastructure’s Special Projects Unit.

The C Field to D Field section of the ringroad project was awarded to Courtney Benn Construction Services for $87M and is 45 percent completed. Excavation for culvert, drain cleaning, placement of sand, and placement of loam are completed. Other works will be completed shortly, the Minister explained. 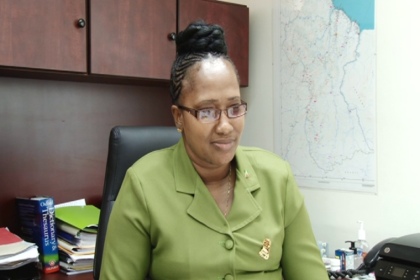 Grace Benn a resident of E Field Sophia said she is grateful for the on-going works. She explained that for the years she lived there she has never seen such works in her community.

Marilyn Winfield, another resident of A Field Sophia said she is thankful her community is developing. She said her community has come a long way and now they have access to water, light (electricity) and now even telephones.

Ferguson said she is positive that works which involve the installations of street lights, culverts and road rehabilitation will benefit the residents. She urged the residents to take care of the resources they now have and not destroy any.