Speaker of the House Dr. Barton Scotland afforded the media the opportunity to engage him on various Parliamentary issues and aspects of reporting at a meeting/luncheon today. Present at the engagement were Clerk at the National Assembly Sherlock Isaacs and Public Relations Officer, Parliament Office Oneika Alphonso. 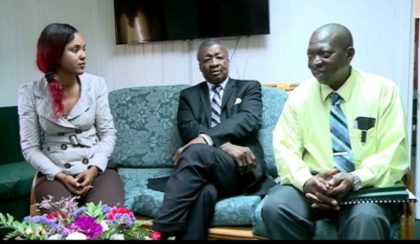 Speaking with media operatives at an informal engagement, in the MPs’ (Member of Parliaments’) Lounge at Public Buildings, Brickdam, Dr. Scotland told the reporters and editors at the engagement that it was meant as a familiarization exercise between the Speaker and the media operatives.

Dr. Scotland fielded questions from various media houses including Stabroek News, Guyana Chronicle, Guyana Times, Citizens Report, HGPTV Nightly News, Capital News,  NCN Six o Clock News, Safe TV Headline News, MTV News Update and GINA on issues ranging from the level of the debates in the House, his legacy, MPs behavior in the House, the number of sittings and committee meetings in the House among others and said that he is not satisfied with some of the reporting coming out of the National Assembly..

The Speaker noted that there have been instances when the reporting did not reflect the actuality of what occurred in the House and were in fact slanted to achieve a particular point. Dr. Scotland did acknowledge that every media house has an agenda, but noted as well that one of the agendas should be a duty of educate the people. In this instance, he noted that the “truth is not devisable.”

Further, Dr. Scotland observed that there have also been occasions, when the news outlets have failed to carry pertinent issues that were raised in the House. “There have been occasions when I read the paper, the day after a sitting that I am looking eagerly for a particular thing that happened in the Parliament and there is none, and it may have been another occasion and then there is none there,” Dr. Scotland said.

During the engagement the Speaker would have also sought to answer some of  media questions as it relates to his expectations of the House, 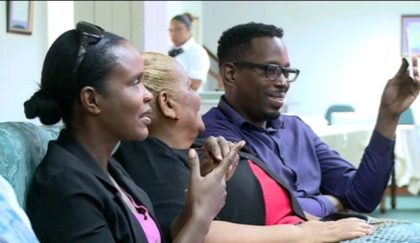 Members of the media at the informal engagement with the Speaker and Clerk of the National Assembly, in the MPs’ Lounge at Public Buildings, Brickdam

the MPs behavior in the House and the Opposition accusation that he was not allowing them equal time to those given to Government MPs to voice their concerns in Parliament.

On the latter, Dr. Scotland noted that there were Standing Orders, that guides the MPs in the conduct of their business in Parliament and which guides him as well in the management of the affairs of Parliament.

“I sit in the House…and some events which I read sometimes, reported the day after are somewhat different, from what I knew took place and I wonder how that could happen. A few times I said maybe the reporter was tired or the reporter may have left the room and filled in the gaps after,”

According to the Speaker, there was a particular occasion that occurred in Parliament and there was not a single comment on any news outlet about that event which warranted not only reporting but comment. 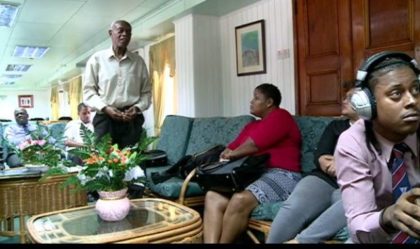 Veteran Journalist Francis Quamina Farrier poses a question to the Speaker of the National Assembly Dr. Barton Scotland during an informal engagement with media at the MPs’ Lounge at Public Buildings, Brickdam

“I am not saying as whole the media does this or that any particular conveyor of the news does this as in a particular consistent fashion but I am just speaking about it from the point of view of someone outside looking in,” Dr. Scotland noted.

The Media operatives also asked about training for the young media corps and about public  parliamentary outreaches, to which the Speaker responded that they are ongoing and Clerk of the  National Assembly said once funding is available there will pursue media training.

Additionally, veteran journalist Francis Quamina Farrier pleaded and urged the Speaker to ensure that the Parliament surroundings are cleaned and kept pristine. The speaker agreed that it should be cleaned and assured him that it will be cleaned. Clerk of the National Assembly Sherlock Isaacs also explained that it is an issue they have grappled with over the years but he assured that it is an area they will continue to actively pursue with the relevant stakeholders. Public Relations Officers Oneika Alphonso also took the opportunity to remind the media operatives about the dress code for the Parliament.