Sport boosted in Aranaputa with gear, lights from NSC

Youths of Aranaputa, Region Nine will now have the opportunity to participate in sporting activities at night as several floodlights and sports gear were handed over to Chairman of their Community Development Council (CDC) Adon Jacobus.

The lights were presented to Jacobus by Director of Sport, Christopher Jones in the compound of the National Sports Commission today.

The distribution of the lights to the community forms part of the Sports Commission’s ‘Light It up Campaign’ which seeks to ensure that all sport grounds countrywide are equipped with adequate lighting.

Sport Director Jones said that the donation also forms part of the Sports Commission’s mandate to ensure that they decentralise sports. Jones added that despite the hinterland possessing an abundance of raw talent, in the past, much of the equipment has been donated to coastland communities.

“Recognising that Aranaputa valley in the North Rupununi is some distance away from Lethem, we wanted to ensure that the young people in that part of the region have the opportunity as those in Lethem. This is part of the start because essentially the community has been doing some development on their ground … we wanted those athletes to have the opportunity to practice under floodlights hence we make this donation,” Jones stated. 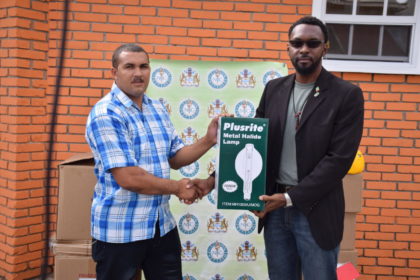 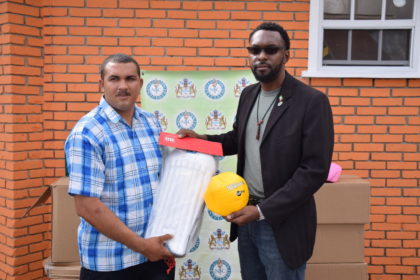 The youths within the community will be appreciative of the equipment donated according to Chairman Jacobus, who expressed that the distribution was a dream come through since the community has been attempting to acquire lights and other sporting gear for several years.

“Within Region Nine, we have talented players; we have persons who can do well in the line of athletics and sports in general and one of our major downfalls of these athletes in the Rupununi is that they were never exposed to running and playing under lights,” Jacobus explained.

He added that “when you bring these athletes to Georgetown and they have to run under lights it poses a problem for them… now that we are developing such move in the Rupununi, I believe that it will boost sports.”

Over the past two years, the government has been heavily investing in sports in the hinterland regions countrywide in an effort to find and nurture the hidden talents the lie in those far-flung areas.