Prime Minister Moses Nagamootoo this evening addressed a large gathering in the compound of City Hall, Georgetown where he declared that, there is no ‘war’ in Guyana and citizens must continue to work together to build the country. 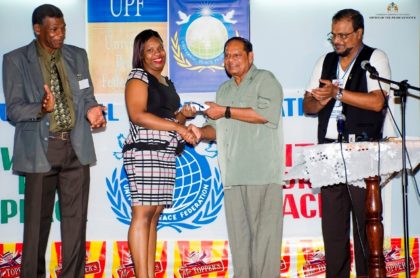 The Prime Minister, who is performing the duties of President, was at the time presenting remarks at the Universal Peace Federation Guyana chapter organised Musical Festival of Peace 2016.

The Prime Minister stated that, “I want to use this occasion tonight to say that we must not wait until we have wars to resolve our problems, we must re-enter ourselves and recreate ourselves as Guyanese with equal rights, so that we all prosper together.”

He said his Government believes in equality and has a non-discriminatory policy and as such is working for the greater good of all Guyanese and for the country.

Referring to the state of conflict in the world today, he stated that “wars and conflicts” are ongoing in many parts of the world, but in Guyana, “we speak of peace.” 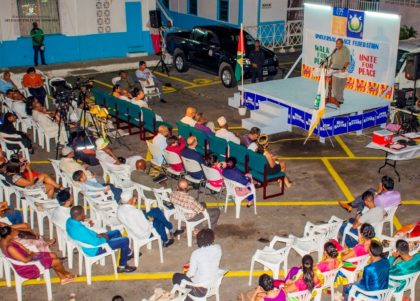 He advised that President David Granger was at the United Nations championing Guyana’s call for peace as it relates to the Guyana/Venezuela controversy. “It coincides with your celebrations here of your own efforts for peace in Guyana. So we are asking the United Nations that this controversy that Venezuela has raised with us under the pretext of some border dispute they said, should be taken to the world court and it should be adjudicated under the rule of law,” the Prime Minister stated. 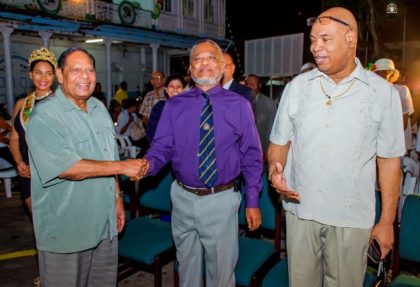 Representing Opposition Leader and former President Bharrat Jagdeo, Opposition Member of Parliament, Juan Edghill told the gathering that, “peace should not be only a word that we should talk about, it is something that we must believe in and must work hard to achieve it.”

Delivering remarks also, former Prime Minister Samuel Hinds, said, “peace we all desire, but we all have to work and to maintain peace.” The former Prime Minister stated that previous efforts at securing peace and unity in Guyana have not yielded the desired results. “Let us keep on going and one day we would find how to live together in this country, particularly at times of elections, peacefully and harmoniously, this is my hope for us,” the former prime minister said. 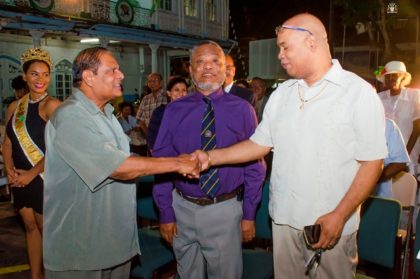 Mayor of the Capital City, Georgetown, Her Worship Patrica Chase Green, who is also a Peace Ambassador, said, the significance of the festival being held in the fore court of City Hall must be underscored.

“The City Hall is one of the sites that have a peace pole planted just to the western end of the compound, and it is not standing in the soil for fashion, instead it symbolises our willingness to cooperate with all stakeholders to bring peace, perfect peace to this beautiful land of ours,” the Mayor stated.

Bringing greetings from the diplomatic corps, Indian High Commissioner to Guyana, Venkatachalam Mahalingam said, the role of the Universal peace Federation in encouraging people to work for peace is commendable. 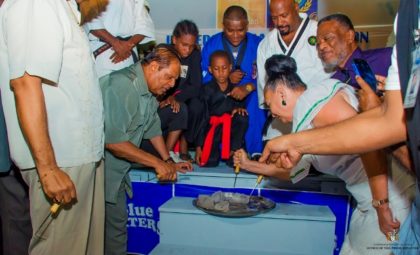 “Let us take an oath today, that we believe that we are all in one family that there is love between us and we never give and take any line that creates animosity amongst us,” he said.

This is the first time that the Guyana chapter of the Universal Peace Federation has organised such an event, and according to its National Chairman, Haji Roshan Khan, it is fostering peace and harmony in Guyana through the various music and dances. 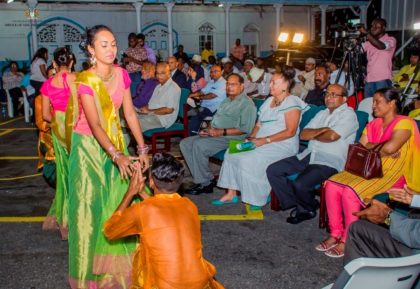 – Dancers performing for the audience

Khan explained that the aim of the work undertaken by the Guyana Chapter of the Federation is to work as a nexus between the Government of Guyana and the opposition in forging unity for national development. Over the past weeks the Guyana Chapter has appointed 50 Peace Ambassadors.

The festival included music, dances and songs from every religion and cultural background in Guyana.

International Day of Peace was observed around the world on September 21,