The Ministry of Education, Department of Youth’s “Teach them young swimming Programme” has attracted a cross section of youths from communities across Guyana. 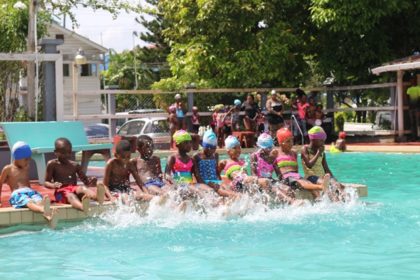 Some of the children learning the basic swimming movements.

The four-weeks swimming programme allows the instructors to teach the youths the basic of the sport including breathing control, kicking, arm movement and formation of strokes. The programme caters for children between ages six to nine and is being held at Colgrain House, Camp Street, North Cummingsburg.

Seven-year-old Leanna Peterson said that joining the programme to learn how to swim became her wish when she was visiting Tower Suites and saw the pool last year. She stressed that after the Tower Suites visit, she was determined to be able to swim like those she saw in the pool.

“We passed the pool and I really wanted to swim so I asked my mother if I can join swimming classes, and so I did. The first time I went into the pool to learn, I was scared to go underwater or to practice but now I am not scared and I am even getting to do it well…. the best part that I like to do when swimming is jumping in the deep and swimming across”, Peterson enthusiastically explained. She noted that learning is fun, additionally    she is also able to teach her fellow classmates so that they can compete and hopefully be able to swim in the deep end with the older children.

Participating also, is nine-year-old Kyra David who said that she enjoys the swimming programme and would not have joined if it was not for her cousin, who encouraged her to do the same when she applied. She noted that some of the lessons can be fun but it can sometimes be tiring.

“From what I have learned, the swimming class is basically when you come and learn to, you need to learn how to kick to 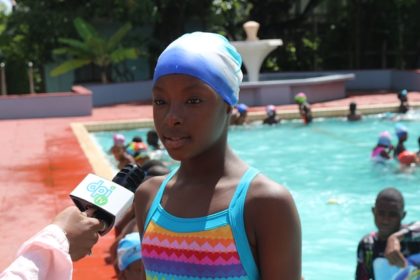 push off, breathing underwater and to dive,” David said.

In an interview with the Department of Public Information (DPI), Swimming Instructor, Cordel Walcott said that, “The ability and skill that we (swim instructors) learn here, is to teach the children how to kick the legs, float the body on top of the water and how to glide and throw their hands. That is the basic that we teach them to do in the ‘Learn to swim programme’ for the Ministry (of Education), Department of Culture, Youth and Sport.” Walcott said that though swimming is considered a basic skill, it is important to learn for emergency reasons and for fun as well.

“Swimming is an important thing in life especially if you go on a vacation or anything. It is one of the skills that you would love to have because you don’t know, emergencies could happen. I would encourage youths to join the club and learn how to swim because the rules and regulations of swimming are very important in your life, especially since the ministry highlighted the importance of learning how to swim,” Walcott noted

The “Teach them young swimming programme” pairs each instructor with 15 students to learn a skill which could possible save their lives and the lives of others. 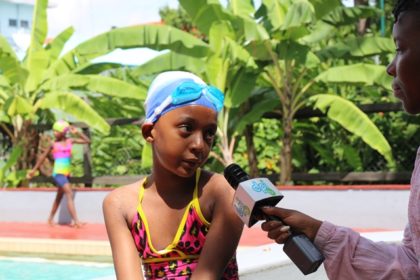 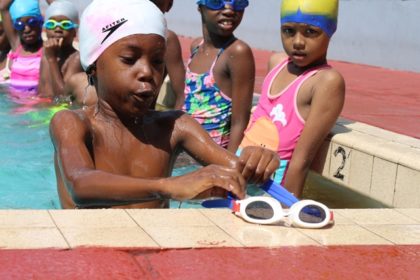 One of the seven-year-old participant retrieving his goggles.