‘The honour of Senior Counsel will not lapse under my Presidency’ – Pres. Granger

May 22, 2019 Government, Ministry of the Presidency, News

President David Granger, this afternoon, assured members of the legal fraternity that the honour of Senior Counsel will not lapse under his Presidency, noting that that title is not a personal favour or a political reward but rather, it is conferred on the basis of merit and is uncontaminated by arbitrariness or capriciousness.

“The title of Senior Counsel is not a personal favour or a political reward but, rather, is conferred on the basis of merit and is uncontaminated by arbitrariness or capriciousness. The eminent women and men before you today deserve the designation of Senior Counsel by virtue of their erudition, experience and expertise. The President is the trustee of the traditions which sustain society. It is my obligation, not an option, to respect our national honours system. It is my duty to pay respect to those to whom respect is due. It is my duty to promote greater respect for our legal system. It is my duty to ensure that the conferment of the title of Senior Counsel would be made annually with regularity and consistency,” the Head of State said.

The President also told the recipients that while the parchment with which they have been presented may fade with age, the honour which it represents will fortify their profession.

“Your preferment will enrich your practice with the passage of time. Public approbation will strengthen public trust and confidence in the legal system. Silk may become threadbare, but scholarship will never perish. The conferral of the title – Senior Counsel – is a proud tradition reserved for members of an honourable profession who have distinguished themselves as being ‘…learned in the law.’ The honour of Senior Counsel though not formally a part of our national honours system – which is governed by its own Constitution of the Orders of Guyana – is a national symbol, alongside other national symbols. The honour of Senior Counsel defines our national identity and is a professional badge that distinguishes attorneys of erudition, experience and expertise,” he said.

President Granger also noted that the conferral of the honour, traditionally, was exclusively a royal prerogative and the authority for making such honours is vested, almost invariably, in Heads of State.

He added that the Constitution and laws of Guyana do not prescribe how Senior Counsel are to be appointed. Instead, prerogative of preferment in this Republic is reposed, by practice, exclusively in the President. President Granger also said failure to confer these awards would constitute a dereliction of these duties and the ceremony must remain a convention of good Government and must be part of the culture of a good society.

Further, he noted that women for the first time, have been duly awarded for their work and years of service in the field of law since the resumption of the Senior Counsel appointments.

“The conferral of the honour of Senior Counsel has become balanced. Three women who are ‘…learned in the law’ were conferred with the title in 2017 – the first time in our history that women were so recognized. Another outstanding female attorney-at-law was appointed a Senior Counsel last year. This year we honour two eminent female members of the profession. The conferral of the honour of Senior Counsel will not lapse under my Presidency. The award, prior to its re-introduction in January 2017, was conferred rarely and irregularly in the preceding three decades. It has now become annual. The nation encourages you to continue, through precept and practice, to serve your country, your clients and your profession. The nation is proud of you all,” he asserted. 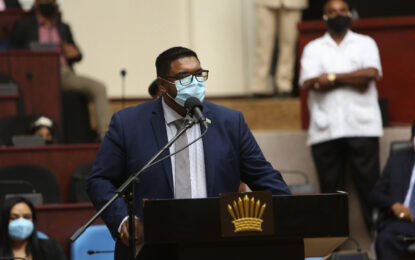 Government of Guyana Supports the UnitedStates...