The integrity of the Caribbean’s financial sector

President of the Cooperative Republic of Guyana

to the Opening Ceremony of the 46th Plenary Meeting of the Caribbean Financial Action Task Force.

(Georgetown, Wednesday, November 15, 2017) The Cooperative Republic of Guyana, commemorated on 6th October, the slaughter of eleven innocent citizens in 1976 in what, up to that time, was the worst incident of international terrorism in the western hemisphere.

Guyanese citizens were killed when two terrorist bombs exploded on board Cubana de Aviación flight CU 455, just off the coast of Barbados. The flight, originating in Guyana, proceeded to Trinidad and Tobago and then to Barbados and would have been en route to Jamaica before its scheduled final stop in Cuba. Guyanese know about terrorism.

The Caribbean commemorated, six days later on 12th October, the 525th anniversary of European arrival on an island in The Bahamas in 1492. The trickle of European interlopers turned into a torrent.

The Region, in succeeding centuries, experienced the establishment American, British, Danish, Dutch, French, German, Spanish and Swedish colonies and territories. These visitors made it the most balkanised region on earth.

The Caribbean became known as the ‘cockpit of Europe’ – a theatre of European conquest and conflict. Warfare between European states was waged in the Caribbean, invariably and vicariously, not only by regular armies and navies but by irregular bands of buccaneers, corsairs, pirates and privateers.

The Caribbean, today, is fighting a war against financial ‘privateers’ to preserve the integrity of its institutions and to counter money-laundering and the financing of terrorism.

Guyana is fit to fight. It embarked on the path of passing robust regulations and legislation to protect its financial system from financing unlawful activities seventeen years ago. It passed:

This legislation, progressively, has corrected deficiencies in the AML-CFT regime and allowed for the improvement of compliance with the Task Force’s standards.

The appropriate agencies – the Bank of Guyana, the Financial Intelligence Unit and the Office of the Director of Public Prosecutions – have been empowered with the authority and autonomy and equipped with the technical and institutional means to discharge their functions under our anti-money laundering and the countering of the financing of terrorism legislation.

The Caribbean, after half a millennium of conquest, conflict and chaos, yearns to be a zone of concord and peace. Located within the main sea lanes which can be used for narcotics-trafficking between the North and South America continents and given its fragmented jurisdictions scattered over 2, 754 million km² of sea-space, with countless cays, coves and islets, the Caribbean has become an attractive destination – a ‘paradise’ – for money-launderers, tax-evaders and assorted transnational criminal cartels.

These crimes have the potential of disrupting our economies, corrupting officials, subverting our institutions, perverting our youth and spawning frightening levels of crime and violence in society.

The Task Force’s recommendations are necessary to insulate the Region’s financial sector from the crimes of money-laundering and the financing of terrorism.

The Task Force’s recommendations can help to insulate the Region’s economies from contamination by ‘dirty’ money and by protecting the integrity of our financial sector from the risks associated with ill-gotten gains.

The Task Force’s recommendations will help, also, to cultivate a stable financial sector that will allow for the facilitation of international trade and investment and enhance the interconnectedness between the Region’s financial sector and the global banking system in order to prevent our banks from being blacklisted.

The Cooperative Republic of Guyana is honoured to host this ‘Forty-Sixth Plenary Meeting of the Caribbean Financial Action Task Force.’   We wish you, the visiting delegates, fruitful deliberations and a pleasant sojourn in our country.

The presence of so many distinguished Ministers, Attorneys-General and officers at this meeting is evidence of the importance that Caribbean governments attach to the Task Force’s core responsibility for the peer review process of the mutual evaluation programme.

The work to be done during this meeting is a necessity for guaranteeing the integrity of the Region’s financial sector and, particularly, for preventing money-laundering and the financing of terrorism.

We are confident that the Task Force’s work will improve the security and prosperity of this region and the safety and happiness of its people. Ω 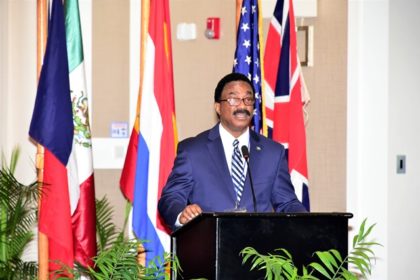 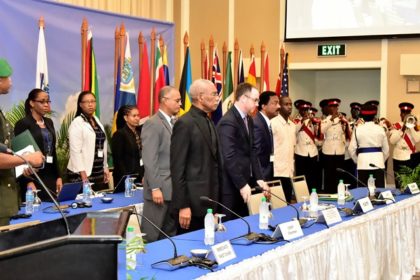 President David Granger at the opening of the 46th Plenary of the Caribbean Financial Action Task Force (CFATF) at the Marriott Hotel Guyana, this morning. 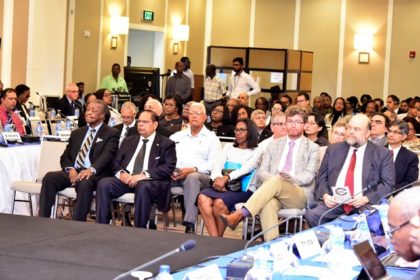 Speaker of the National Assembly, Hon. Dr. Barton Scotland, Prime Minister Moses Nagamootoo, Ministers of Government and Members of the diplomatic corps at the Opening Ceremony of the 46th Plenary of the Caribbean Financial Action Task Force (CFATF) at the Marriott Hotel Guyana, this morning.