Prime Minister Moses Nagamootoo called on the Opposition to put to an end their dilatory tactic because it violates the standing order of the National Assembly. 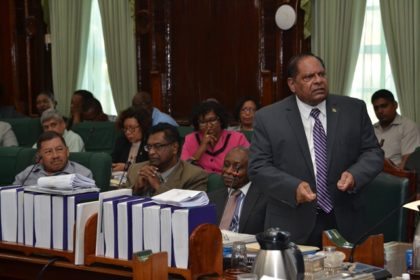 In the National Assembly today, the Opposition side of the House made attempts to move several amendment motions to the ones put forward by the Minister of Finance during the consideration of the capital and current expenditure for 2018 for constitutional agencies.

The PM called out the Opposition side of the House for their attempts to frustrate the sitting.

“What we have here in all are five hours, but what we have here, if you permit me, Sir, is an attempt at procrastination to defeat the resolution of the National Assembly, which the Rules and the Standing Orders of the House does not entertain in terms of any dilatory motion or attempt at such motions. But we have seen motions from the floor as another mechanism, another roost, to frustrate the work of this National Assembly,” PM Nagamootoo said.

The Opposition’s actions were described as “boisterous and destabilising” and PM Nagamootoo noted they were speaking with “forked tongues” in their defence of the constitutional agencies.

“What a day of shame!! That those people who stabbed the constitutional agencies in the back and cut the throat of the constitutional agencies can set them self-up here today as defenders of these agencies! Sir, I speak passionately on this issue, Your Honor, because I am seeing the various attempts by honorable members of this house to frustrate the consideration of these estimates,” PM Nagamootoo said.

The Prime Minister noted that it was the Coalition government that moved the agencies from statutory to constitutional while it was on the opposition side of the House.

It was explained by the Prime Minister that the Fiscal Management Financial Act and its Amendment provides for the Minister of Finance to issue a budget circular. Within the Budget Circular, Section 7 of the Act, notes that the Minister shall give the guidance as to the state the considerations that have to be taken in agencies submitting their proposals.

Failure to adhere to the circular was among the reasons identified by Minister of Finance, Winston Jordan, for the 2018 budget for constitutional agencies being reduced from what was being asked for.

“It cannot be an open-ended proposal, it cannot be fiscal irresponsibility in making these proposals, it must be within the framework of national affordability and that was what was guiding the other side when they were over here. But they prorogued the National Assembly to destroy Parliamentary Democracy. That was what they were talking about…,” PM Nagamootoo said.