Minister of State Joseph Harmon said on Sunday that government will not allow the work of the Guyana Elections Commission (GECOM) to be stymied by the continuous ramblings of the opposition. He noted that the work of the elections body must move forward, now that a chairman has been appointed.

Minister Harmon was at the time addressing residents of Mocha Arcadia, East Bank Demerara (EBD) at the primary school in the community.

While the issue of the appointment of the chairman has been addressed ad nauseum, Minister Harmon said he needed to reiterate that President David Granger acted in accordance with the constitution, when he chose retired Justice James Patterson as the new GECOM chairman. He said the Head of State has already made a commitment to uphold the democratic processes in Guyana.

According to Minister Harmon, the chairman has already been appointed and “it is time for him to get to work,”.

He said the chairmanship of the GECOM has now become the rallying tool of the opposition. 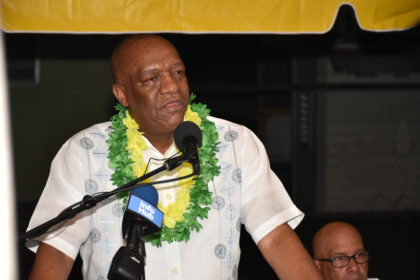 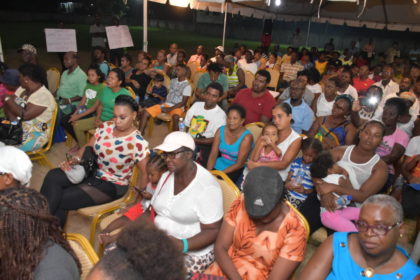 According to Minister Harmon, the chair of the GECOM was left vacant for some ten months following the resignation of Dr. Steve Surujbally, who he said left the post because of the hounding of the opposition.

“After Dr Surujbally delivered on the 2015 elections, the PPP who felt (they had the transport for Guyana), who felt that they own this country, could not accept that they lost. When the election results were announced they started up this tune that Surujbally thieved the elections for the APNU… until he said I am tired of this and had to leave,” Harmon explained.

Making reference to the recent demonstration by the opposition, while the President addressed Parliament last Thursday, Minister Harmon said government condemns in the strongest possible terms the action, noting “this is not who we are as a people, that Jagdeo and his group will not define who we are with that behaviour, to say to the rest of the world this is the behaviour that is expected of Guyana.”

He said government regrets the conduct of the opposition in the presence of the diplomatic community and other senior officers in Guyana and “in the face of the world.”