Saturday, October 8, 2016 – Georgetown, Guyana: Over 300 households in Timehri North, East Bank Demerara are expected to gain access to running water for the first time, before the end of this year.

This new development was related to residents by Managing Director of the Guyana Water Incorporated (GWI), Dr. Richard Van West-Charles.

He was speaking during a specially organised meeting with community members on Saturday afternoon at the Timehri North Prison’s Sports Club. 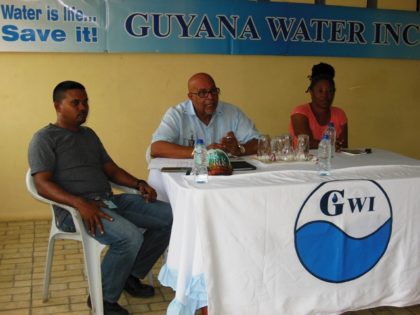 He explained to residents that this arrangement will see GWI subsidizing part of the cost while residents will pay a percentage.

Responding to a question from a resident, the GWI MD explained that, “Where communities want it (water access) right away, we do a cost sharing. If not, you would have to wait until 2018 when it would be in the budget”.

In order to get the project started, a minimum of 300 households need to commit to playing their part.

Dr. Van West-Charles therefore encouraged those who turned out at Saturday’s meeting  to mobilise other villagers to get on board, which Chairperson of the Community Development Council Ms. Carmen Simon has committed to.

He pointed out that those who do not commit would not enjoy the luxury of running water at their premises. 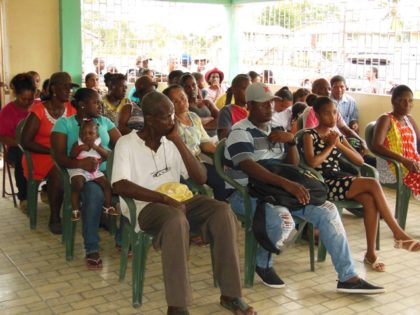 GWI’s Executive Director of Project Implementation and Partnership Building, Ramchand Jailal, told residents that based on measurements, approximately 10km of pipe lines need to be laid to ensure water connectivity for each household.

He also noted that the supply and installation of the pipes would cost an average total of GYD $45 million.

The residents were told that the payment contract would see them making a down payment, after which they would pay off the remainder of their part within eight months, in addition to their consumption cost.

They were also cautioned about tampering with the utility company’s infrastructure since it is a criminal offence.

Dr. Van West-Charles and a team of officials will be returning to the community of Timehri North on Sunday, October 16th at 15:00hrs, when they are expected to reach with representatives from the 300 plus households to finalize arrangements.