Troy Doris recognised for ‘putting Guyana on the map’

John Adams M.P this morning presented an award to Commonwealth Games Gold Medalist Troy Doris on behalf of Minister of Public Health Volda Lawrence. The gesture was in recognition of Doris’ performance at the 2018 Commonwealth Games held in Australia. 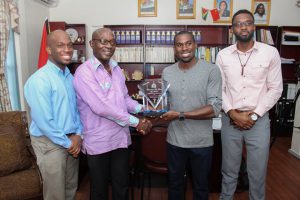 From Left to right Denroy Tudor – International Desk, Ministry of Public Health, John Adams – Member of Parliament and Technical Advisor to the minister of Public Health hands over a token to commonwealth Gold Medalist, Troy Doris in the presence of Director of Sport Christopher Jones.

Adams told Doris that, “You were able to place Guyana on the map and the place the country’s name, Guyana, on the lips of people… Guyana is particularly proud, so is the minister and the Ministry of Public Health hence this gesture.”

It was further noted that the award will act as a form of motivation for improved performance from Doris while encouraging local national athletes to emulate that sportsman.

“He plays a pivotal role to those into the triple jump sport. I trust that while Mr. Doris is in Guyana that he can meet with some of our athletes to give encourage them and to give them pointers,” Adams added.

Troy Doris thanked the Public Health Ministry for recognising his achievement, “Things that are big and spectacular like accomplishments do not unnoticed. I do appreciate this award and I thank the Ministry of Public Health.”

He said it is an honour to represent Guyana and looks forward to continuing making the country proud. “Maybe in the future there is going to be a plan to further my athletic performances as well as others and so I am very thankful for the opportunity”, the gold medalist said.

The Gold medalist also met with the Georgetown Mayor, Her Worship Patricia Chase-Green and City Councillors. They also presented him with a plaque in recognition of his achievement. 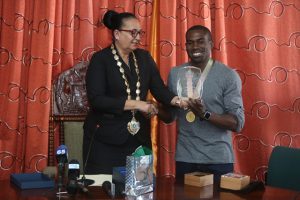 While accepting the acknowledgements, greetings and well wishes Doris said, “It’s not every day that one person gets the backing of an entire country. I am glad that I am actually here… I don’t think this is my last medal, I will definitely be back with another medal.”

It is hoped that Doris will cop another gold medal when he competes in the 2020 Summer Olympics in Tokyo. If he is successful, Mayor Chase-Greene said, this would be the first Olympic medal for Guyana in forty years.

The Mayor said that it has been some time since Guyana has celebrated the achievement of a sports medal, “The last time Guyana would have won any medal was at the Olympics in 1980 by Michael Parris in the bantamweight boxing arena.”

Troy Doris is currently in Guyana during the week of May 21 to 26, the week of Guyana’s 52nd Independence. During his stay, he is scheduled to be part of a series of courtesy calls on public officials including Minister of Social Cohesion, Dr. George Norton and His. Excellency President David Granger. Doris will also attend the 52nd Flag Raising Ceremony at D’urban Park on Friday, May 25, 2018.