A concerted effort has been launched by the Ministry of Agriculture to promote investments opportunities in Guyana’s intermediate savannahs, part of a two-pronged approach aimed at dealing with climate change and its effects on agriculture here.

Agriculture Minister, Noel Holder (center) during the meeting. To his right is Region Ten’s Regional Executive Officer (REO) Gavin Clarke and to his left another member of the council.

Agriculture Minister Noel Holder and a team of officials from key agencies,  made a presentation to the Regional Democratic Council of Region 10, Upper Demerara-Upper Berbice, outlining the scope of agriculture potential available for development in the region’s savannah lands.

In his preamble prior to the PowerPoint presentation on the intermediate savannahs and the opportunities that await investors, Minister Holder stated that while mitigation doesn’t only assist in the improvement of the country’s economy, but also prevents economic losses.

” In this regard, the hinterland and Intermediate Savannahs of Region 10 have been earmarked as Guyana’s new agricultural frontier, as the country continues its quest to narrow the gap between the coastland and hinterland regions,” the Minister said.

The Ministry of Agriculture has since commenced construction of Agricultural stations in the major eco-zones including one at Ebini, in Region 10. These stations demonstrate the agricultural potential of the area, such as orchards, nurseries and seed production as well as breeding herds of cattle and small ruminants to provide breeding stock for farmers and seed stock for entrepreneurs.

“ There is no doubt in my mind that Region 10 is vital to the development of Guyana. It is centrally located in the heart of the country, bordering seven other regions, and has a span over the major rivers. More so, it has a geo-strategical position as a gateway to Brazil. As His Excellency, the President said, “This region is unique…..There’s no other Region like this that is so well connected, well wired to the whole country other than the Upper Demerara-Berbice Region,” Minister Holder stated.

To ensure the success of the model for the agricultural development of the Intermediate Savannahs, good planning and governance are necessary for both social and economic development.

To this end, a number of studies have already been effected and incorporated in a detailed plan to make the development of the Intermediate Savannahs a feasible and ‘bankable’ proposition. Among those are:-

Meanwhile, Regional Chairman, Renis Morian, in welcoming the development, stated that the intervention by the Ministry is a timely one which will significantly aid the advancement of Agriculture in the region.

He added that while work has been done in the past much more needs to be done.

“We are indeed happy that the Ministry of Agriculture will be working with the Region to advance our agricultural potential, however, much more can be done and I am adamant that this will birth something spectacular,” the Chairman added.

The Intermediate Savannahs cover areas of approximately 2,700 aqkm or 270,000 hectares. It consists of 70 percent forest and 25 percent of savannah lands and comprise five discrete areas;-

The development model for the Intermediate Savannahs speaks to a period of about 20 years and points to successful identified crops suitable for the soils types there. These include soybean, citrus, peanuts among others. The rearing of livestock as is the case at the GLDA’s pilot station at Ebini is another successful venture underway.

A section of the council during the meeting. 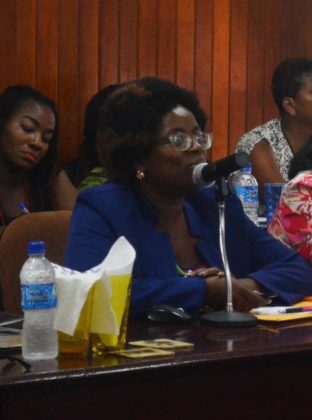