Speaking to the media on Thursday, Fouet said the justice system in Guyana is being used as a model by other countries. 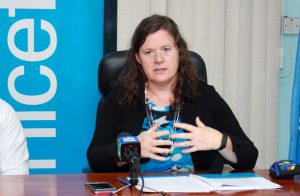 According to Fouet, while there are a few challenges here, there are many positives, including a thriving justice system.

UNICEF was instrumental in the launching of the Sexual Offences Court last year. The country representative said the court remains a facility that is conducive for minor victims, which will prevent “second victimization” during their testimonies.

According to Fouet, UNICEF is also in conversation with Chief Justice and Chancellor of the Judiciary for the acceleration of cases involving minors and the establishment of the Youth Court.

The Sexual Offences court is housed in the Supreme Court and represents the commitment of the judiciary to be responsive to the concerns raised in society about the conduct of trials of sexual offences cases.

Chancellor of the Judiciary, Justice Yonnette Cummings-Edwards, at the opening of the court in November last year, said victims and witnesses of sexual offences require specialist treatment. She said if the process is not handled carefully, it can pose secondary trauma to them.

As such, the idea of a specialist court dealing with everyone involved was birthed. A court that would provide justice for all, she noted.

The court has a panel of eminent judges including Justice Simone Morris-Ramlall, Justice Joanne Barlow, Justice Navindra Singh, Justice James Bovell-Drakes and Justice Brassington Reynolds whose functions are rotated. Witnesses also have a special room to give their testimony, while a panel of support staff is being overseen by the Chief Justice.