Efforts to boost agricultural production in the Upper Demerara–Berbice Region are continuing as Agriculture month activities continue across the country. 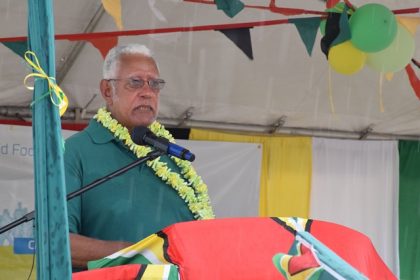 In remarks at World Food Day observances held at the Bayrock ground in the Region Ten community of Linden under the theme, “Change the face of Migration; invest in food security and rural development,” Minister of Agriculture Noel Holder said while Linden is traditionally known as the mining town, transformation of the Region lies in agriculture and government will continue to support growth and development of the sector.

“Our work in Region Ten remains significant in the areas of drainage and irrigation; the village of West Watooka will soon benefit from the construction of hydraulic structures to complement the already existing works which have seen 78,243 metres of channels cleared by thirty-five community development councils,” the minister said.

Further, the National Drainage and Irrigation Authority (NDIA) is maintaining a presence in the Linden Community to ensure that agriculture production is not lost. It currently has one long boom and two mini excavators deployed to clear channels in residential and agricultural areas during periods of excessive rainfall.

In addition, several agricultural agencies continue to aid farmers in the areas of crops and livestock production and marketing.

Produce of Linden on display.

“GLDA has been playing a major role in the resuscitation of livestock production based in region ten and the Guyana Marketing Corporation has been pushing for the incorporation of value-added production in the mining town,” Minister Holder added.

Other efforts to boost agricultural production in the Region Ten communities include a collaborative workshop on “cost of Production” for farmers and agri-processors that was jointly held by the Inter-American Institute for Cooperation in Agriculture (IICA) and the World University Service of Canada while there are plans to extend the Guyana Shop corner which was opened earlier in the year.

Since assuming office in May 2015, the current administration continues to encourage the movement of Guyana’s agriculture inland, as it continues to develop the intermediate savannahs and hinterland regions, as the country’s new agriculture frontier.