The Government of Guyana and the Caribbean Development Bank (CDB) today signed US$218,020 grant for the implementation of Local Government Reform Project. This project is designed to ensure the local government has the right knowledge, tools, and resources to be effective. 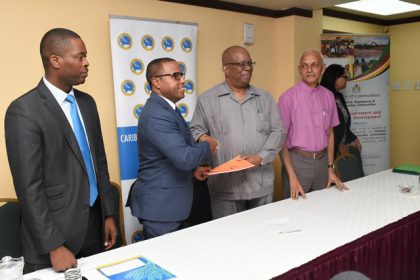 Director of Economics of the Caribbean Development Bank (CDB) Dr. Justin Ram handing over the document to Minister of Finance, Winston Jordan, in the presence of Minister of Communities, Ronald Bulkan and President of GAM, Carwyn Holland.

Under the project, consultancy services will be provided to: build the Ministry of Communities’ capacity to better support the process of reform in local government; build the capacity of the Guyana Association of Municipalities (GAM); and conduct an institutional assessment of municipalities, to help them to improve performance and to better deliver results.

The document was signed by Minister of Finance, Winston Jordan and, Director of Economics, CDB, Dr. Justin Ram, in the presence of Minister of Communities, Ronald Bulkan and Permanent Secretary, Emil McGarrell, at the Cara Lodge, Quamina Street, Georgetown.

During his remarks, Minister Ronald Bulkan reaffirmed the government’s commitment to fulfilling the Constitutional provision for devolution and decentralisation of resources to the Local Democratic Organs (LDOs.)

The minister pledged that his ministry will continue to work diligently towards empowering local government, and therefore, initiatives planned for 2018 include: Holding of Local Government Elections, working towards the modernisation of property assessment, support for LDOs through community enhancement programmes, funding for councils, promoting community participation, facilitating local economic development in communities; infrastructure development in local organs and institutional strengthening and capacity-building.

“It is within this context, that I must say that the ‘Capacity Building for Local Government Reform Project’ is timely and is in keeping with national priorities regarding local government reform. Reform will translate to a more decentralized approach to public service delivery and to improved community participation in the local governance structure towards greater inclusivity and economic development. This project will respond to the need for a realistic assessment of what local government can achieve in the current circumstances, and what is required to achieve best practice, taking into account the view of stakeholders”, Minister Bulkan pointed put.

CDB’s Dr. Ram said that Guyana is on the cusp of a major transformation and so, the emphasis on local government reform is timely. “I really want to commend the Government of Guyana for undertaking this projects at this important time in its development cycle.”

He said that CDB sees good governance as a necessity for good development while noting that, “Local government can be much more than a conduit for the provision of central government services.  By being closer to local communities, it is better placed to find local solutions to local problems, freeing up central government to address the many national challenges it faces today and will face in the future.”

The project will also review the current rate collection process including the requisite property value updates, as well as examine other avenues for revenue generation. It will also seek to support a local structure that incorporates and considers the needs of vulnerable populations including women, children, youth, the elderly, persons with disabilities, marginalised groups and those disadvantaged by poverty and other circumstances. 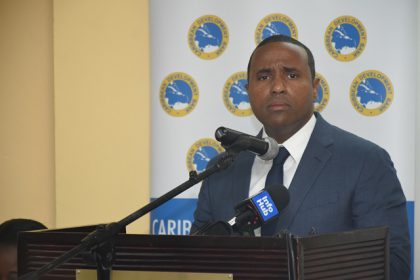 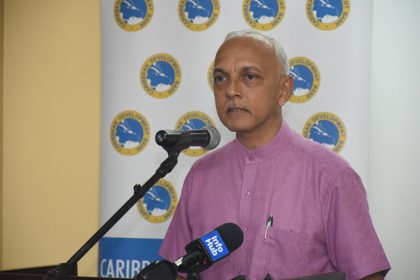