-Head wraps: from a mark of enslavement to a symbol of empowerment and fashion

As one of the most significant days in Guyana’s history – Emancipation Day approaches, it is imperative to acknowledge our local talent that signifies and commemorates this annual holiday of freedom.

Entrepreneur and founder of Despat’s Creations, Patricia Helwig, offers pieces that mainly reflect the African culture, or other cultural variations. One of her outstanding garments is the head wrap.

Helwig explained, “I’ve noticed that persons have been more inclined to tap into their culture in the past five years, and what I try to do is to educate young people a lot so that they can know where they came from, where they are, and where they are heading to. It is important to know your culture because without it you are lost.”

Headwraps believed to have originated in Sub-Saharan African signified communal identity as well as expression of personal identity. 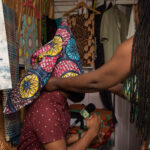 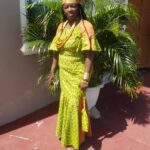 Owner of Despat’s Creations, Patricia Helwig displaying on of her headwraps 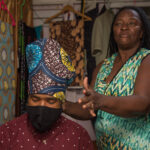 During the period of slavery, many slave masters required head wraps to be worn by enslaved men and women as a sign of ownership and mastery of their lives.

Over time the headwrap went through many iterations; today while it is worn as a statement of fashion it remains a cultural link with the African culture.

“We know about our ancestors as slaves, but with Emancipation, there is a sense of freedom. Being emancipated means a lot to me because it means that as a black woman, I am free,” Helwig told DPI.

The businesswoman plans to attend the virtual Emancipation celebrations hosted by the ministry’s Department of Culture dressed in her full-African attire.

The Emancipation programme is currently being aired on the National Communications Network (NCN) Channel 11 and is also available for viewing on the Department of Culture’s Facebook page from July 24 – August 2.

Fire Safety exhibition hosted to highlight hazards in the home