The President’s address to the UNGA today focused on the people, peace and the planet. He also stressed the importance of resolving long-standing interstate conflicts in pursuit of peace. 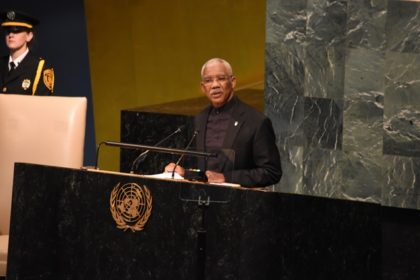 President Granger noted Guyana remains at the peril of Venezuela whose claim to the country’s territory dates back before Independence.

“Disturbing developments within Venezuela have attracted the world’s attention and aroused the concerns of many of us over the privations of its people.  The Caribbean people wish for the Caribbean to be a Zone of Peace. The Venezuelan claim to Guyana’s territorial integrity, however, would be a threat to that zone,” President Granger told the Assembly.

Guyana and Venezuela are currently engaged in the good offices’ process facilitated by the UN Secretary-General, António Guterres, with the aim to finally resolving the long-standing controversy, by the end of the year.

“Guyana has been working assiduously with the Secretary General’s Personal Representative.  Guyana looks to the international community to ensure that Venezuela is not allowed to thwart the processes of judicial settlement which is the clear and agreed path to peace and justice”, the President declared.

The Head of State also supported the call for the reform of the UN’s Security Council “to give even greater voice to developing countries”. Striving for peace must remain a “ceaseless quest” for the UN if it is to provide a good life for the world’s people, he noted.

“The United Nations is the paramount global instrument of peace. It has a vital role to play in ensuring respect for international law through the International Court of Justice and the Security Council”, the President asserted.

“We affirm the right of the Palestinian people to a homeland and to a dignified existence. We demand the withdrawal of the injurious economic embargo against the Caribbean island of Cuba. The embargo frustrates that state’s right to development.”

Protecting the people and the planet

President Granger charged the nations at the General Assembly to “resolve to reinforce respect for the rights of citizens within the governance structures of our member states” even as it is challenged by a growing humanitarian crisis across the world.

“The Sustainable Development Goals (SDGs) represent our collective desire and determination to eradicate hunger and poverty from our planet while promoting equal opportunities in education, employment and social justice for both men and women.  The adoption of the SDGs has catalysed our aspirations for a better world into concrete and forward-looking actions and objectives,” the President said.

However, a sustainable planet is vital for the survival of humanity and the President noted that there has been an indifference towards protecting the planet. “Climate change is not a fiction or the invention of a few extremists”, he empahsised while highlighting the devastation Caribbean states suffered at the hands of several hurricanes.

“Guyana is playing its part, within the limits of its resources, to provide relief to affected populations in sister Caribbean states”, President Granger noted.  The Head of State also recommitted to Guyana’s pioneering role in global environmental stewardship which includes the signing of the Paris Agreement and other measures taken nationally, such as the conservation of Guyana’s rainforest, to protect the environment.

The President also called on UN to preserve the Guiana Shield, of which Guyana is part. “Guyana calls on the United Nations to help protect and preserve the ‘Guiana Shield’ as a global resource for the survival and sustainability of our planet.”

President Granger expressed confidence in the nations of the UN to “fulfil the promise of the UN Charter and the theme of the General Assembly to focus on people, to strive for peace and to protect the planet”.

The theme for this year’s UN General Debate is, Focusing on people: Striving for peace and a decent life for all on a sustainable planet.