The Volunteer Youth Corps Incorporated (VYC) today received a $19.9M grant from the Government of Japan to upgrade and expand its youth centre.

Today, a simple signing ceremony was held at the VYC’s headquarters, Durban Backlands The funds were made possible through the Grant Assistance for Grassroots Human Security Project (GGP).

According to Chief Executive Officer (CEO) of the VYC, Goldie Scott, the agreement with Saea Constructions caters for a modernised facility which can accommodate 200 learners at once. It will help to boost the organisation’s delivery of quality education and social services 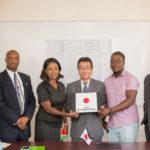 Participants during the signing ceremony on Friday. [In photo from right] Forbes July, International Cooperation Department Director at the Ministry of Foreign Afrairs, Chief Executive Officer (CEO) of the VYC, Goldie Scott, His Excellency Tatsuo Hirayama, Ambassador of Japan to Guyana, Samuel John of Saea Construction, and Kashir Khan, Honorary Consul General for Japan in Guyana. 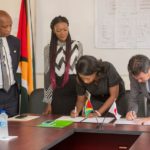 – His Excellency Tatsuo Hirayama, Ambassador of Japan to Guyana and Chief Executive Officer (CEO) of the VYC, Goldie Scott signing the document during the ceremony on Friday.

Scott said currently only a total of 30 youngsters can access training simultaneously and the goal is to achieve a larger intake.  “Through this project, we will be able to serve a thousand plus at-risk and vulnerable youths who are current beneficiaries of Volunteer Youth Crop’s programme,” Scott explained

When completed, the new building will contain three floors, including an additional nine classrooms, a library, STEAM and Information Technology labs, while a portion has been allocated for home economics activities. Added to the new look will be a recreational space for a cafeteria.

“If we can highlight the importance of holistic services to our youth both in schools and various communities with upgraded and modernised service, we believe that we will address a lot of the social challenges that are affecting our young people,” the CEO emphasised.

His Excellency Tatsuo Hirayama, Ambassador of Japan to Guyana disclosed that this is the third such endowment the Japanese Government has presented to the VYC through its grant project. He noted that with the new decade of development which has begun, there is no doubt that “Guyana’s economy will soon take off to the next level.”

According to Ambassador Hirayama, “everyone will agree that this coming period will be of paramount importance for Guyana, particularly with the full-scale launch of offshore oil production.”

Meanwhile, Forbes July, the International Cooperation Department Director at the Ministry of Foreign Affairs, stated that the agreement with the Japanese Government and Guyana represents the international cooperation which was cemented in 1969.

“There is no doubt that the expanded facility and amenities of the centre will have a positive impact on the youths and the communities it serves, Director July added.

VYC is a non-governmental organisation that provides education and social opportunities/support to youths in Guyana. The entity is comprised of a multi-dynamic group of young professionals, a Board of Directors, staffers and volunteers.