“We have benefited tremendously from China” – PM Nagamootoo

Prime Minister Moses Nagamootoo, who is performing the duties of the President, delivered the keynote address at the Chinese Embassy. Prime Minister Nagamootoo commended Ambassador Cui Jianchun for his initiative in organizing a seminar for the occasion.

The Prime Minister related that this event will allow for exchanges of ideas and the sharing of views on how to improve the relationship between Guyana and China. He noted that the 5 point ‘IT’ initiative presented by Ambassador Jianchun, “has registered a new policy of China to reach out to countries such as Guyana.”

“Guyana committed itself to the One China Policy, it was an attempt to forge a lasting relationship”, Prime Minister further explained noting too that Guyana has always chosen its friends strategically.

Ideas, Prime Minister Nagamootoo highlighted are important to transform our country and “so today we celebrate that China has reached out to Guyana.” He thanked the Government of China through Ambassador Jianchun for allowing Guyanese from all disciplines to study in China, especially our journalists and our police men and women.

“We have benefited from tremendously from 45 years of friendship”, Prime Minister Nagamootoo said.

Relations between China and Guyana date back to 1853 when the first batch of indentured Chinese labourers arrived. Formal diplomatic ties between the two Republics were established on June 27th, 1972. Guyana was the first English-speaking Caribbean country to establish diplomatic relations with the People’s Republic of China on June 27, 1972.

Chinese Ambassador to Guyana Cui Jianchun during his remarks gave an overview of the 45 years of friendship between China and Guyana and urged persons to share their experiences over the last 45 years so that the younger generation would be able to learn about the countries relationship.

Ambassador Jianchun explained that China still has a lot of challenges facing them and have faced many before reaching their present Gross Domestic Product (GDP) of 11 Trillion USD. 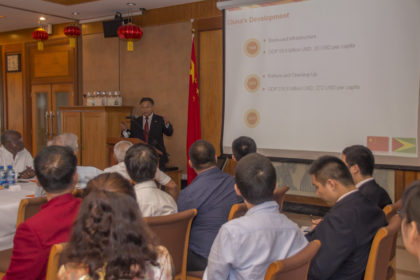 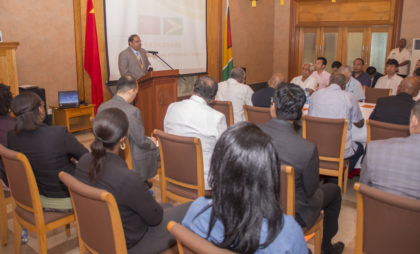