Georgetown, Guyana – (April 7, 2018) The Government of Guyana through the Guyana Lands and Surveys Commission (GLSC), yesterday, came in for high praise as 54 residents of Mocha/Arcadia, East Bank Demerara (EBD) received Titles to leased land from Minister of State, Mr. Joseph Harmon at a simple ceremony held at the Marks Supermarket. The document offers the residents a 50-year lease on the lands for a yearly rental.

The recipients are the first batch of an initial 135 residents, who first received temporary ‘Permission to Occupy’ lands in January last year from Minister Harmon at the same location. Following the issuance of the ‘Permission to Occupy’ in 2017, the Commission has been working with residents to ensure that they meet the requirements to be granted titles to the lands. The residents, who have been occupying the land for up to 30 years, are only now receiving legal documentation for the lands.

Addressing the beneficiaries and residents from the area, Minister Harmon said that it is a proud day for the village and the Government as it has fulfilled its promise. Noting that this is an issue the administration inherited when it took office, the Minister of State said that it had committed to addressing the challenges in three stages. The first was the investigation and examination of the problem in Mocha while the second stage entailed the GLSC conducting its own work to deliver provisional leases. The issuance of Titles, therefore, Minister Harmon said, is the third stage. 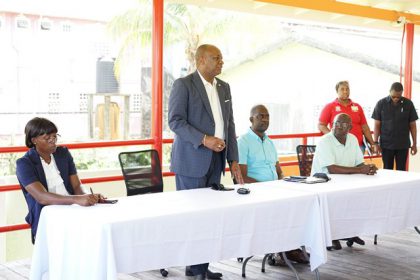 Minister Harmon told the residents that they are now receiving leases at a time when Guyana is on the cusp of greater development and land is becoming an invaluable commodity.  “I want to ensure you that Guyana is on the right path. You have a strong Government. You have a Government that is caring and you have Government that delivers on its promises. Ownership of land is important and this is why we are making this point in delivering these leases to you. I believe that every little spare inch of land you got, somebody somewhere will try to come to get it from you and this is why it is important that you occupy the lands beneficially, which you have been allocated here today. When you own this land, you own a piece of that Guyana of Eldorado that you read about since you were little children. You own a piece of it. So when you get these leases this afternoon, I think that this is something that you must be proud about,” the Minister of State in his passionate tone.

On this note, Commissioner of the GLSC, Mr. Trevor Benn, in his remarks, said that when the Government took office two years ago, the Ministry of the Presidency was inundated with calls from members of the community, who felt that they were not given a fair deal with the way lands were allocated in the community. Since then 320 lots for housing and agriculture purposes and 58 larger plots strictly for agriculture purposes have been made available to the residents. 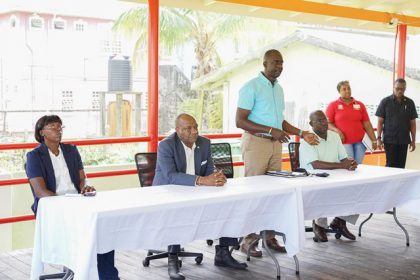 Mr. Benn said that the Commission was awaiting the outcome of the survey, which would have made these lots permanently available to the residents of the community.

“We’re about to deliver the final product. We will not be able to know exactly how much land you’re occupying until an actual survey is done. We come to the ground to do this survey, which happened last November and December. I want to remind you that this exercise came at a very high cost to the Commission, but we were committed to it because we promised you to deliver these 50 year leases and we’re going to do that today. We will tell those of you who will continue to have conversation with us before the final document is released to you but suffice it to say that all of the people who came and applied and made claim, laid a claim, will be receiving a 50-year lease for lands in Mocha,” he said.

Mr. Benn too, encouraged the recipients to utilise the land for the purpose for which is was intended. He noted that it is important that they demonstrate that they deserve the land.

“All leases have conditions and one of the conditions in the lease is that you must beneficially occupy the land. You must beneficially occupy the land. We expect that you will follow the conditions in the lease, occupy it, but more importantly there’s a cost associated with the lease, an annual rental, which you’re required to pay. Both of these things are important, beneficial occupation and the payment of the annual rent. If it is not done… according to the State Lands Act, your lease can be cancelled. We don’t want to do that so I’m encouraging you to please utilise the land for which it is given to you and please. If you have any problem, we have a team of people at Lands and Surveys who are ready and willing to receive you and help you with whatever challenge you may face,” Mr. Benn told residents. 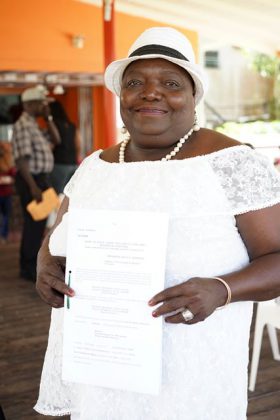 Director on the Board of the GLSC, Mr. Randy Storm said that the Board and the Commission are fulfilling the promise made by the President of a good life for all. He noted that the Government has done its part and it is now up to the residents to ensure that they fulfil their end of the bargain.  “You, the people who are receiving your leases, make good use of it. Grow your crops, build your houses, and prepare for your children’s future. Your land must not be sold or bartered in any form or fashion. Congratulations once again on receiving your leases and when we return, because this is a continuous process; we want to hear no sounds of distress but sounds of rejoicing,” he said.

Meanwhile, Ms. Francis Thompson, one of the beneficiaries in an invited comment, expressed gratitude to the Government for the initiative, noting that it has always been a dream of the community to receive documentation for the lands they have occupied for over two decades. The lands, she said, will now be used to drive self-sufficiency in the village. “I must say how appreciated we feel for this venture in allotting these leases to the residents of Mocha Arcadia. I think this is long overdue and this would take us a very far way in our economic drive towards self-independence; self-independence as promoted by our Excellency, President David Granger to provide entrepreneurial skills to persons within our community and I think that this is the beginning of much more to come. We are very appreciative in seeing some of the dreams of ours for our community being realised,” she said.

One resident, Mr. Nigel Lewis, said that he has been living in the area for over 13 years and it is indeed a great feeling to have finally received his Title from the Government, just after about one year of seeking intervention. 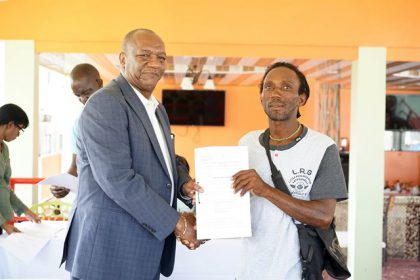 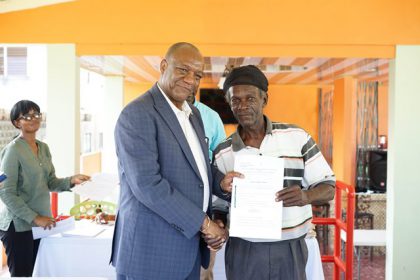