The immunisation of Venezuelan migrants upon entry to Guyana is seen as the first step to protecting the local population from diseases and infections. As such, health facilities in border communities in Regions 1 and 7 have been enhancing their immunization efforts.

One such facility in the Barima-Waini Region is the White Water Health post. This facility is staffed with a Microscopist, and two Community Health Workers (CHW) while provisions are currently being made through a community development project to have a doctor to live and work in the area. 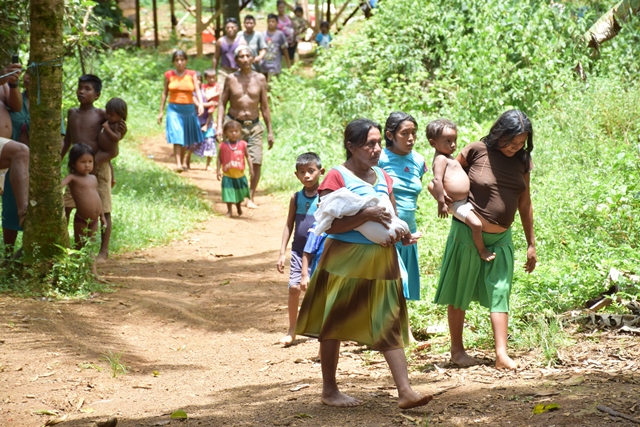 Some of the migrants Settling in Khan’s Hill Region 1.

CHW for White Water, Orbin Domingo who has been there for approximately five years says that he has noticed that Venezuelan migrants are coming to Guyana with minor ailments and diseases which they may not be aware of.

The influx of migrants has placed a demand on the health post to render both preventative and curative treatments for these minor illnesses. More importantly, the CHW said his main objective is to safeguard the health of White Water residents and the region at large.

“Before we never had Malaria cases but now, we have two within our catchment area… White Water is generally a healthy community… so we are protecting them [migrants] as well.” Domingo said.

He said whether their ailments are known or unknown upon their first visit, vaccines are administered this is to prevent outbreaks in these particular areas.

“With some of the children especially never having received vaccines, so that is a very big risk [to our population]. We immunise because that is the first and most important thing. As soon as they enter, we find out their immunisation status, some of them have their Venezuelan card but some don’t have it so we give them their vaccines,” The CHW added.

Domingo said that since the White Water Health Post also serves as a checkpoint for migrants, the health post staff work closely with border control officers to ensure that migrants entering the country, when the health post is closed, are located and immunised.

Though the facility is equipped to render adequate primary healthcare services, there are some challenges. According to the CHW, “Number one, is the language barrier. Most of them are Spanish and Warrau. I know a little Warrau so I can say ‘hello’ ‘good morning’ and ‘how are you doing’? I can also ask what is your name but when they begin to respond it’s a problem because I can’t understand everything.”

Despite these challenges, the White Water health team is not deterred from fulfilling its primary objective.

Since the first group of migrants entered Guyana, to date there are more than 36,000 persons who have crossed the borders most of them seeking healthcare.  This has led to the public health officials increasing supplies of drugs, vaccines and medical supplies for health posts and centres in communities near the border.