The Minister of Natural Resources, Raphael Trotman, on Friday last, donated floodlights and a sewing machine to the Wisburg Secondary School following a request for assistance by the school’s Headteacher. The donations are to improve facilities at the school’s sports ground and the home economics department.

During his ministerial outreach at the school in April, the minister heard issues and made commitments towards the development of the Wisroc/Block 22 community to residents. It was here that Headteacher, Colleen Michael Joseph made the requests for a sewing machine to better the home economics department’s functions and plants for the school’s agricultural block. While agreeing to these requests and fulfilling the latter on spot, the minister observed that the sports field stood without lighting and committed to lighting the ground for athletes who train after school.

Items that were officially handed over. 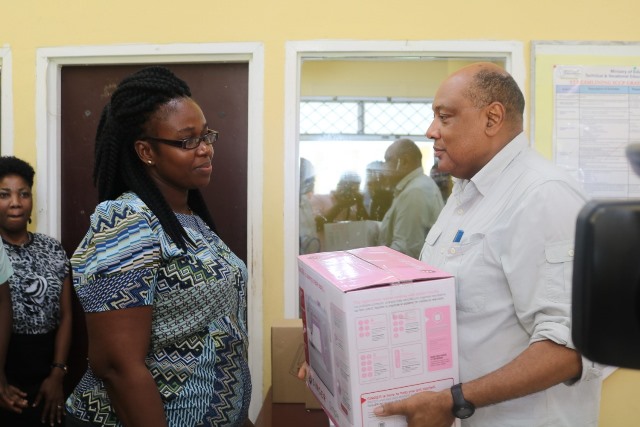 Minister Trotman hands over the sewing machine to a representative of the Home Economics Department. 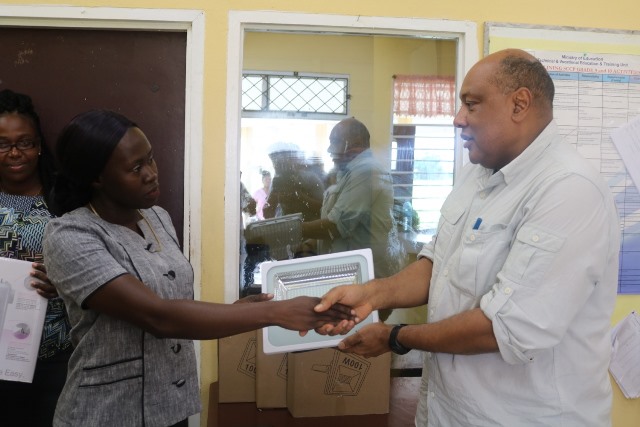 Minister Trotman, during the handing over of the equipment, mentioned that it is the fulfilment of the commitment made to the school and an overall delivery on behalf of President David Granger. He urged that the items be utilised with care to ensure success in the home economics department and that of the athletes as they train.

“You made your request, and in my capacity as minister, I have fulfilled them. I now hope that your department is better equipped and that your athletes are happy that they have a field they can utilise in the evenings,” Minister Trotman said.

The Headteacher expressed joy in receiving the items and in knowing that the promise has been kept.

“I am so happy that the minister has kept his promise to provide us with a sewing machine as well as lights for our field. These will benefit the children for CSEC and students who use the field for sporting activities,” an enthused Joseph said.

Minister Trotman will also be donating wooden poles for the lights to be mounted.