Seven first-time youth representatives spanning nearly all the political parties that are contesting the upcoming General and Regional elections fleshed out their ideas on both leadership and the future of Guyana.

Spearheaded by the University of Guyana through a special edition of its Turkeyen & Tain Talks, the Thursday evening conversation at the Pegasus Hotel saw the young leaders pitching their ideas through a series of prepared questions. 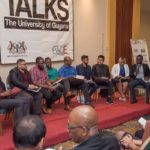 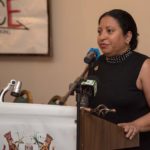 Though Peoples’ Progressive Party Civic’s youth candidate was a no-show, the programme proceeded with the youth leaders taking turns as they answered the burning questions.

In one minute, what makes a good leader?

To this question, youth candidates sought to capitalise on common character traits that were often linked to the presidential candidates of their respective parties.

First to answer was Carlos Gonsalves of A New and United Guyana (ANUG) who noted a leader must be ferocious, calculated and objective, followed by Mahendra Pagwah of Change Guyana (CG) who said the person should be one who makes a difference in someone’s life.

“Honesty” was the common desirable trait in responses from APNU+AFC’s Dr. Quincy Jones, Davon Van Veen of Labour and Justice Party (LJP), and Kobe Cort for the Citizenship Initiative (TCI).

Dr. Jones further added that a good leader is, “somebody who can mobilise and engage people,” while the other candidates clung to descriptions such as God-fearing and charismatic.

Where on the national agenda do you think women and children’s issues should fall and why?

Many of the candidates offered extracts from their party’s vision for Guyana in response, but it was APNU-AFC’s Dr. Jones whose detailed answer was met by overwhelming approval from the audience.

According to Dr. Jones, “women and children for the past five years have consistently been a cross-cutting theme for the APNU-AFC.”

With the unveiling of the “Decade of Development”, Jones noted President David Granger’s unwavering commitment towards ensuring women represent 50 percent of the members of Parliament elected under the APNU-AFC ticket, a move to increase women’s representation through the legislature.

While Dr. Andrew Hutson of The New Movement (TNM) in his response questioned feminist doctrine and called for more men to rise to leadership roles, the remainder of the panel embraced placing women and children’s issues on the front burner of the country’s development.

TCI’s Kobe Cort boasted of his party’s women to men ratio and Avinash Singh of the United Republican Party (URP) issued his strong support for women and children’s issues.

What was your key motivation for deciding to step forward at this time?

LJP’s Van Veen said he entered politics to contribute to the decision-making process rather than “sitting in a corner muttering and fretting”.

Likewise, TNM’s youth candidate remarked, “I am here only to give voice to some of the things that need to be said.”

Sharing an immensely personal story of his journey was Dr. Jones who explained his candidacy is as a result of, “a sense of security” under the current Administration.

Dr. Jones emotionally reflected on the period referred to by President Granger as “The Troubles” under the previous administration. “As a youth in McDoom, I used to walk with my ID card because I was afraid that the police might come and pick me up [So] I wanted to have something to identify that I am Quincy Jones,” the young doctor mentioned.

“I no longer feel the need to put my ID card inside my wallet when I leave the home,” Dr. Jones continued.

Candidates fielded other prepared questions on leadership and governance after which members of the audience were allowed to question the Government-hopefuls.

Deputy Vice-Chancellor (PACE) and Chair of The Transitional Management Committee (TMC), Professor Paloma Mohamed indicated with so many new faces on the party lists contesting the forthcoming elections, the decision was made to host the event to garner their views on leading the nation.