Parliamentary leaders were appointed today ahead of Thursday’s sitting of Youth Parliament.

In their first act of parliament the 40 secondary school students from across nine administrative regions nominated the Prime Minister, Leader of the Opposition and Speaker for their National Assembly sitting. 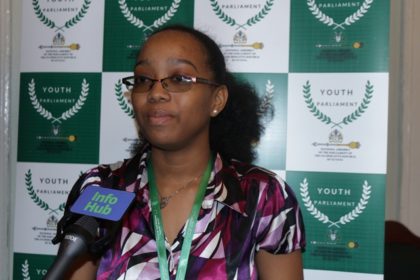 Nia Williams, who was elected Prime Minister, will lead the government side of the House. She spoke to Department of Public Information (DPI) about her confidence to lead her team in a successful debate on the motions before the House.

“What I intend to do is basically take my team into victory,” Williams said. She added that she is confident she can “bring forth my points” despite her limited experience in debating.

The aspiring lawyer will be going up against Leader of the Opposition Zóé Sills. Sills said she is expecting strong competition at Thursday’s sitting. “I’m expecting a very strong battle from the government but I’m fully prepared to take my team to the end of the debate,” she said.

Sills added her participation in this year’s Youth Parliament “has definitely sparked an interest in politics”. Presiding over the House as Speaker will be Tyrese Johnson. The aspiring preacher is confident he can serve his appointment well and had shared this inspiration with the House:

“I think that we are all debaters and we are capable of speaking and I think that all of us have the ability to show that we are passionate about debating and we can bring out valid points about what is on our minds about certain issues.”

Today, the participants learned about the rules and etiquette of the National Assembly. They were also mentored by Members of Parliament.

This is the third annual youth Parliament hosted by the Parliament Office.

Leader of the Opposition, Zóé Sills. 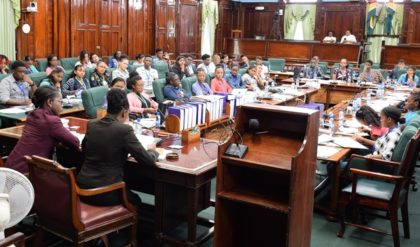 The young parliamentarians being briefed on the rules and decorum of the National Assembly.