Ramnarine, in the Commissioner’s boardroom, Eve Leary, Kingston, highlighted that there has been increased dismissal actions against ranks that were found culpable of unprofessional conduct when compared to last year. To date, 15 ranks have been dismissed compared to 12 in 2015. Dismissals were for corrupt transactions, firearm and narcotic related offences, assault, simple larceny and rape.

Allegations of unprofessional conduct are most often made against traffic ranks and anti-crime officers, Ramnarine pointed out. “We do robust investigations of complaints and malpractice.” 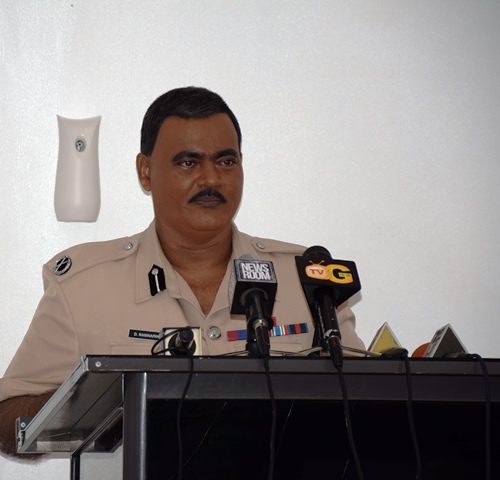 Additionally, the acting commissioner pointed out that there has been an increase in court cases brought against interdicted ranks. In 2015, 21 ranks were interdicted for offences ranging from conspiring to commit murder to assault. This year that number stands at 24 interdicted ranks for offences ranging from attempted murder to assault. The Police Commissioner Acting assured that in all these instances, ranks were subjected to due process.

More recent sting operations have nabbed a constable and a rural detective involved in “corrupt transaction” and another serving rank that was said to be “a menace” to patrons of the seawalls. Condign action against these ranks will be taken shortly, the acting commissioner said.

Meanwhile, Ramnarine acknowledged that “a large percentage of lower level” ranks of the GPF consists of young people who lack “much needed experience, patience (and) tolerance”, but assured that efforts to strengthen their capacity continue. “It’s got to be constant supervision, you’ve got to be driving in their head all the time, they’ve taken an oath to serve… that their conduct and their discharge of those responsibilities are always under focus,” Ramnarine said.

Capacity building, continuous training and random testing are efforts being used by the GPF to improve its public standing.

“The force is more of a public force now; it serves the public,” Commissioner Ramnarine reiterated. “We now have a capacity and capability in the Criminal Investigation Department of this GPF that is unparalleled.”