More emphasis will be placed on improving the delivery of healthcare services at the New Amsterdam Regional Hospital; this is according to Regional Chairman Permaul Armogan during an interview with the Department of Public Information (DPI). 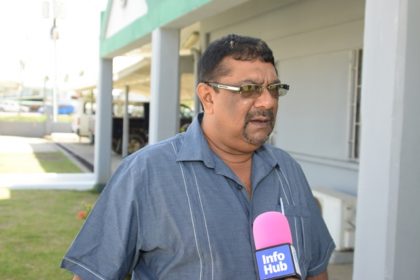 The Regional Chairman (RC) disclosed that among the health development projects, a new Accident and Emergency (A&E) department is slated to be opened, pending the completion of ongoing works and a new maternity wing will also be constructed. The regional administration also plans to install a new theatre at Skeldon Hospital.

Completion of the current works is dependent on the weather, as Armogan explained, progress has slowed somewhat due to rain. However, he assured that the regional administration will be able to complete its projects since there has been an improvement in weather conditions.

Armogan said there are issues surrounding the establishment of a health centre at No. 77 village. He disclosed that the regional administration initially chose the additional space on the recreational ground in the area, as the site for the facility. However, residents in the community refused the proposal, stating that they have plans for the playground ground.

“They (residents) did not want a health centre in the playground because they said very clearly to us (regional administration) that they have plans to put in two pavilions”, Armogan explained.

According to the RC, residents have informed the Civil Defence Commission (CDC) of their intention. He explained that currently the regional administration is scouting for another location to erect the health centre and has written to the Ministry of Housing requesting assistance in locating a vacant lot.

“If we (regional administration) do not get that (vacant lot) then we will try to do it in No.76.  So, one way or the other, the contract has already been awarded but the contractor is waiting until we find a location where that health centre will be placed,” the RC noted.

Region Six was approved $6.1B during the National Assembly for the 2017 budget, $2.882M is catered for health care delivery.