The President, who was the guest speaker, outlined the ten major sectors of development which will aid economic development at the launch of the Decade of Development: 2020-2029.

“My Government is looking to the future. Guyana is entering a new phase of economic development. The advent of petroleum production, next year, will result in sustained expansion of the economy. Petroleum revenues will be prudently managed to ensure sustained benefits to all sectors of the economy.  The ‘rising tide will lift all boats’.  We will launch a Decade of Development: 2020-2029. The ‘Decade’ will witness the emergence of a world-class education system aimed at ensuring that the best skills are available for economic development,” President Granger said. 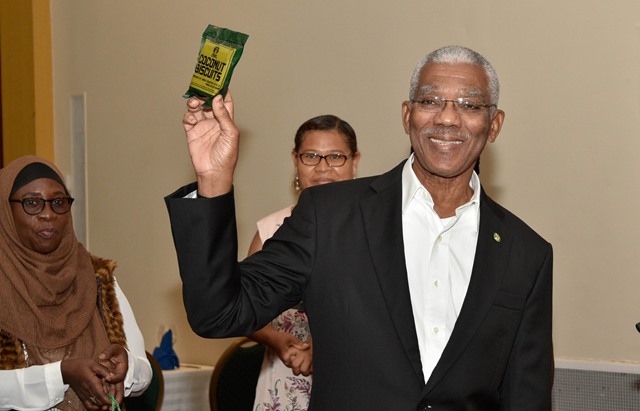 President David Granger holds a pack of coconut biscuits locally made while at the Guyana Manufacturing and Services Association business luncheon. 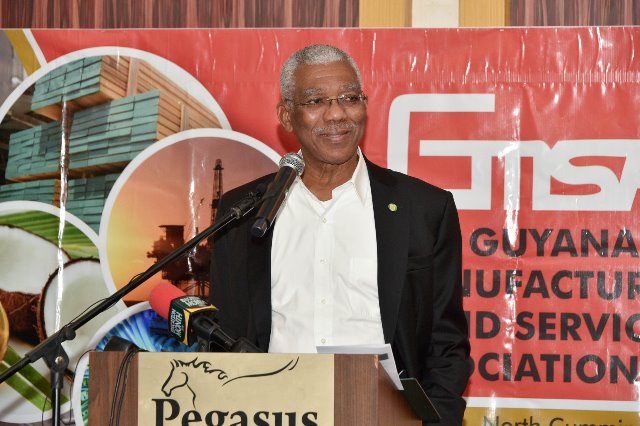 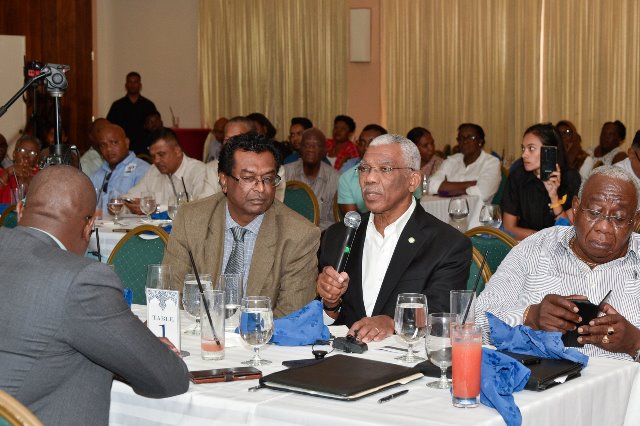 The ‘Decade’ will include at least ten major sectors of development, inter alia, the President said pointing to education reform. He said education reform will ensure that the education system is more reflective of the needs of our new economy; access to information technology and of course, the promotion of social cohesion.

The Head of State said the ‘Decade’ will see economic expansion, diversification, restructuring, including value-added manufacturing and food security. There will also be focus on energy security and the transition to renewable and clean sources of energy and environmentally sustainable management of our natural resources.

Additionally, President Granger announced that empowerment of regional and local communities, a promise made prior to the Coalition entering office and on entering office, within less than a year, Local Government Elections (LGEs) which had not been held for over two decades, was held.  The LGEs were held twice in four years of the Coalition Government.

The Head of State also said efforts will be maximised to eradicate extreme poverty, destitution and homelessness.

“We will emphasise infrastructural expansion, not only in terms of highways and bridges, but in term of aviation and riverine transport, in particular to serve the hinterland communities of Regions One, Seven, Eight and Nine,” said President Granger.

The President said too that emphasis will be placed on internationally competitive trade and investment; ensure and enforce national and border security, human safety and the development of our international relations to protect our sovereignty and territorial integrity; and strengthen institutions especially in light of constitutional reform to ensure good governance.

President Granger referenced the fact that after more than a decade, there has been an inability to appoint a substantive Chancellor of the Judiciary and a substantive Chief Justice.

“The ‘Decade’ will place emphasis on education, which is of paramount importance.  Investment in education represents a large share of national Budget.  This year, 2019, we spent 17.5 per cent of the Budget, 6.3 per cent of GDP, on public education.  My Government will expand expenditure on education during the Decade of Development.  We shall focus, increasingly, on graduating better trained teachers who could impart more critical thinking skills to children.  The public education system and curriculum will be modernised to reflect recent research and to address advancements in pedagogy and learning for children,” President Granger said.

The Head of State said too that his Government will improve access to education through the Public Education and Transportation Service (PETS) which will be expanded to provide more boats, buses and bicycles to move children at no cost to their families, to ensure that they attend school.

The school-feeding programme will also be expanded to encourage children to go to school and to remain in school, he said.

President Granger told the business community that the public education system will be reshaped to emphasise science, technology, engineering and mathematics (STEM) without deemphasizing the humanities.

“We’re serious about science, technology, engineering and mathematics and this will remain the focus of our educational development in addition to paying attention to the humanities,” he said while noting that the objectives of the ‘Decade’ are aligned to the Green State Development Strategy; Vision 2040 (GSDS) and to the Sustainable Development Agenda and its 17 Sustainable Development Goals (SDGs).

“The ‘Decade’ will yield increased business opportunities, including for the manufacturing and services sectors. The ‘Decade’ will ensure an enabling environment which would allow our local entrepreneurs to capitalize on these opportunities. We envisage a future of thriving businesses and globally-competitive manufacturing and services.  The ‘Decade’ will accelerate the process of the renewal of regional development which commenced when we entered office with the establishment of four new capital towns,” President Granger said, adding that the capital towns are expected to become drivers of the economic and social development of these huge hinterland regions, which occupy three-quarters of our territory.

The capital towns, he explained, will allow for increased business opportunities and the improved access to public services.  He noted too that it is essential for economic development that we allow these regional capital towns to provide the services which business need in every single region of this country.

“The Decade of Development will promote sound environmental management of our natural resources. It will witness greater emphasis on preserving and protecting our environment, air, water and earth, for the benefit of future generations,” the Head of State said.

Moreover, he said the ‘Decade’ will reduce youth unemployment and expand initiatives such as the recently-established Guyana Youth Corps, the Hinterland Entrepreneurship Youth Service (HEYS) and the Sustainable Livelihoods and Entrepreneurial Development (SLED) which are serving as incubators of youth entrepreneurship and employment.

“The Green State Development Strategy has identified a pivotal role for the manufacturing and services sector in the economic development of this country.  The economy will be realigned along increased diversification and a low-carbon pathway. Emphasis will be placed on building a competitive manufacturing base and moving production away from primary production towards more value-added production of goods and services,” President Granger said as he assured the business community of Guyana’s bright future.

“Guyana’s future is bright. We are on the right path. We are moving forward. We will progress more rapidly during the Decade of Development 2020-2029. My friends I assure you, the private sector, the engine of growth, the agent of national development that we expect and we will help you to play an integral role in ensuring that the next decade will be a decade of unsurpassed and irreversible progress and prosperity for our country,” the Head of State said.