─ 1st programme of its kind launched in Region 8

The Department of Social Cohesion marked Monday’s International Youth Day 2019 with the extension of the Inter-village Social Cohesion Exchange Programme. Young people representing 15 Indigenous communities congregated at Kato Secondary School for the launch of the first programme of its kind in Region 8, and the third such nationally.

In an invited comment some of the participants shared their expectations of the exercise. Marisa Albert, one of the young participants from Chenapau said, “I would like return and do new things for my village because …. I would like to encourage others to get involved in some of these things that I would have learnt and improve themselves.”

Like Marisa, Doris Francisco from Kurukabaru plans to “learn new things so when I return home, I can share it with my people.”

Kato resident, Kemal Robinson said among the things he hopes to take away from the exchange program are “… discipline, cooperation and how to interact with other young people.” 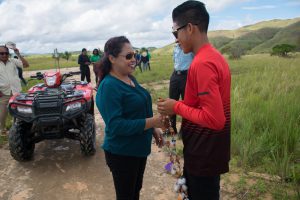 Minister of State, Hon. Dawn Hastings-Williams being greeted by one of the participants of the exchange programme 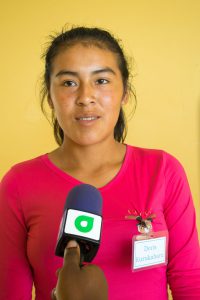 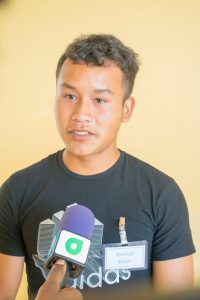 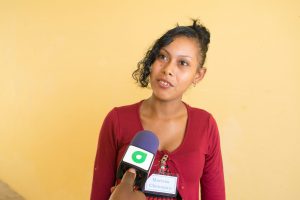 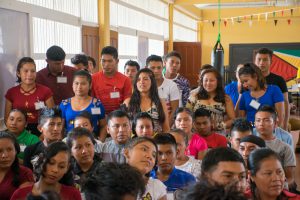 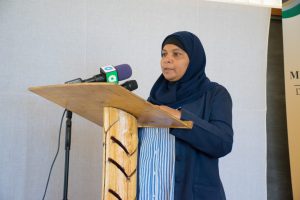 Coordinator(ag) within the Ministry of the Presidency’s Department of Social Cohesion, Natasha Singh-Lewis

Minister of State, Hon. Dawn Hastings-Williams, in her feature address, urged the 106 youth participants to play their role in Guyana’s development.

“I want to encourage you to make the full use of the eight days here; intermingling with each other, sharing ideas, sharing your dreams, sharing your visions and you will be an active participant in developing North Pakaraima, Potaro-Siparuni Region and your country as a whole,” said Minister Hastings-Williams.

Spearheading the programme was Coordinator(ag) within the Ministry of the Presidency’s Department of Social Cohesion, Natasha Singh-Lewis. According to the acting coordinator, the youth will learn to appreciate the differences that exist between their cultures.

“We want to ensure that all of you understand that we are different, but that is not a bad thing. We must work out differences. We must aim to work together,” Coordinator (ag) Singh-Lewis explained.

The Department of Social Cohesion will seek to achieve this goal through various teachings, particularly understanding conflict-resolution.

“Our differences can only mean one thing. It is our strength,” the Coordinator(ag) reiterated.

While the programme has much in store for the indigenous youth, the Department of Social Cohesion has expectations towards the near future.

“Coming out of this training, it is not just a one-off training. You will have to develop projects that will indicate development for your communities. That project will help you to demonstrate what you have learned here,” Singh-Lewis noted.

The Coalition Government has invested approximately $19M in the exchange programme being hosted in Kato, Region 8. This exercise seeks to provide Indigenous youth with the skills needed to advance their communities. Members of the Regional Democratic Council along with Kato’s Toshao were also present and gave brief remarks.