$2B to rehabilitate hinterland airstrips

The Ministry of Public Infrastructure plans to create better access to hinterland areas in 2019. This will be realised through a budgetary allocation of $2Billion that will cater for the maintenance and rehabilitation of airstrips in Regions One, Seven, Eight and Nine. 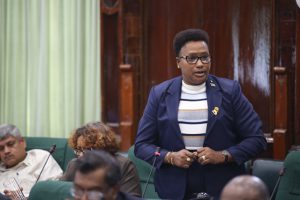 Minister within the Ministry of Public Infrastructure, Hon. Annette Ferguson.

Included in the allocations for upgrades to the airstrips are $50Million for Port Kaituma and Phillipai $50Million also. Also, $184Million has been provided in budget 2019 for the rehabilitation of the Lethem aerodrome.

It was announced by Finance Minister Winston Jordan in his budget presentation on November 26, that Lethem will see the establishment of a regional airport.

Minister within the Ministry of Public Infrastructure, Hon. Annette Ferguson in her contributions to the 2019 budget debates indicated that maintenance and rehabilitation of hinterland airstrips remain a high priority on the government’s agenda.

“Our government understand the importance of having access and ensuring the provision of goods and services to the hinterland communities and the fact that our Indigenous brothers and sisters along with members of the business community depend on air travel into various communities.”

Additionally, in order to allow night flights to and from the hinterland, $17Million has been set aside for the procurement of LED lights and charging ports for airstrips in the communities of Mabaruma, Port Kaituma, Bimechi and Mahdia.

In 2018, the government provided the total sum of $250Million to conduct upgrades at the Bemichi airstrip in Region One and Kamarang in Region Seven.