Attorney General (AG) and Minister of Legal Affairs Basil Williams is looking into the legality of a number of certificates of titles issued to several indigenous communities, just before the May 2015, General and Regional Elections.

Residents in a number of these villages now find themselves having titles which  were handed out by the previous administration, which they claim have no legal standing. 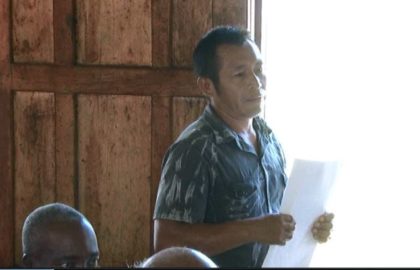 Vice-Captain of Omanaik-Kamdary Village, Region Seven, Mr. Austin, raising the village’s concern of the false certificate at the meeting in Imbaimadai, Region Seven

The matter was raised with Minister of Natural Resources, Raphael Trotman at the National Toshaos Council (NTC) Meeting and again in Imbamadai by Mr. Austin, Vice-Captain, Omanaik-Kambary Village, Region Seven.

“The issue is with our land title certificate,” Austin said.  “We understand that it is not recognised by the GGMC, (Guyana Geology and Mines Commission) and we often wondered if this certificate is valid, and why it is not public or gazetted, and none of the GGMC officers could recognise it,” Austin asked of the Minister.

In responding, Minister Trotman said that the Government has found many villages that were issued certificates of titles, just before the May 2015, General and Regional election, but have no records to show that the certificates are valid.

“Yesterday (Wednesday), I spent all afternoon with the National Toshaos Council and some of the very things that you are saying, that just before elections a set of documents, in law, you say purporting to be titles were handed out, but when we checked the records, there is a missing gap between the process and the signatures,” the Minister told the Vice-Captain.

The Natural Resources Minister explained that the government is seeking to unravel what really happened.

“Many of them are with the Attorney General Chambers now to see if somebody should be charged for fooling the people…because it’s mischief…it is cruelty to come and lie to you and fool (you), to try to get the vote, I’m not sure,…but we are investigating these things and we would have had to pass them over to the police actually,” the Minister said.

The Omanaik-Kambary Village, Region Seven certificate of land title was issued on March 10, 2015 by the PPPC administration. 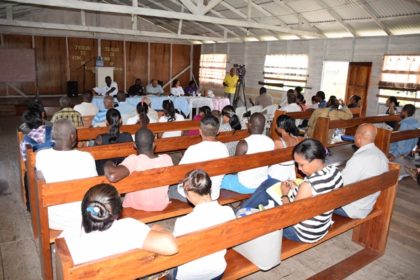 Residents at the meeting in Imbaimadai, Region Seven

Minister Trotman on Thursday, visited Region Seven and met with the residents of Imbamadai, and other surrounding indigenous communities, on issues of community development.