– Minister Mustapha commits to engaging Min. Of Home Affairs on the matter

Following several reports by farmers from Cotton Tree, West Berbice about theft of crops in a number of villages, Agriculture Minister, Zulfikar Mustapha has committed to launching an urgent investigation into the matter.

During an outreach to several villages in West Berbice earlier today, farmers expressed the challenges faced by ongoing instances of theft, adding that they are unable to profit off of their cultivation as a result of these occurrences.

Omishwar Shivnarine, a farmer from Cotton Tree said persons from neighboring villages are coming into the backdams and demanding the produce of a number of farmers.

“We the farmers in Cotton Tree, D’Edward and other areas, we are facing a very serious problem in the backdam. All our produce is being stolen. Even if we are there they come and take it away because it is a bunch of them. Residents of Number 5, they are the ones who come there. They are the ones who, even if you are in your farm, they will come there. Whatever produce you have they take it away. Since 2015, what they are saying is that when we plant they will come and take everything that we have. A lot of us are being beaten. We have to hide and bring out produce sometimes. We really need something to happen so that we can have our produce Mr. Minister,” Mr. Shivnarine said.

Minister Mustapha said that he was shocked at these reports and assured the farmers that a thorough investigation would be launched.

“This is a very serious matter with persons taking your produce right in front of your eyes. I will be making contact with the Minister of Home Affairs and an investigation will be launched soon. If we have to have a police presence in these backdams to ensure these types of things do not happen we will work towards that. We will also work to have the persons carrying out the theft apprehended,” Minister Mustapha said. 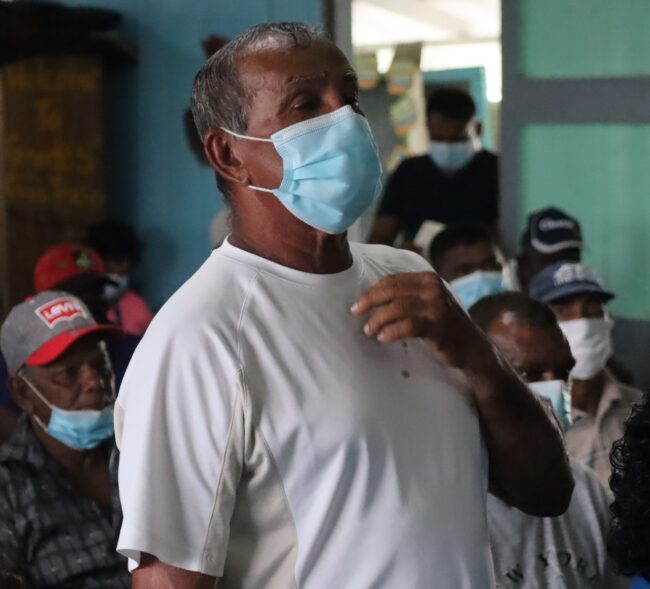 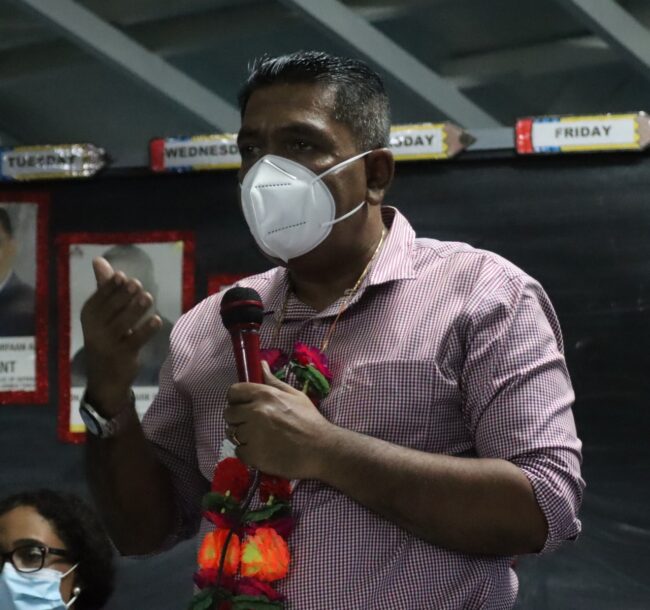 During the outreach, Minister Mustapha also revealed that his Ministry is currently engaging the Ministry of Agriculture, Animal Husbandry and Fisheries in Suriname to have licenses issued to fishermen who usually fish in the Corentyne River.

“Last week, myself and a number of other members of Cabinet accompanied His Excellency, President Irfaan Ali to Suriname. During that trip, I was able to speak with the Minister responsible for Agriculture on a way forward as it relates to the issuing of licences to our fishermen to fish in the Corentyne River. Just a few moments ago, the Agriculture Minister in Suriname was trying to contact me to discuss this issue,” Minister Mustapha said.

A number of other farmers also raised issues about the need for improved drainage and irrigation. One farmer also raised the issue of cattle grazing in his rice field.

The subject Minister informed the gathering that officers from the Guyana Livestock Development Authority (GLDA), the National Drainage and Irrigation Authority (NDIA) and the National Agriculture Research and Extension Institute (NAREI) will be returning to the villages to meet with the residents on these matters.

“My officers are here today and they will be coming back to meet with you in a few days to get details on the works you need to have done. They will be developing a work programme to be added to their activities for the coming year. We are currently in the process of developing Budget 2021. Even though we were able to do some works with this emergency budget, the major projects will have to be undertaken in subsequent budgets, starting with Budget 2021. I want to assure you that we will work with you to have all these works completed,” Minister Mustapha said.