The Aranaputa Processors Friendly Society (APFS)  in the North Rupununi is now looking to tap into international markets to sell their peanut butter.

The Department of Public Information (DPI) recently visited the  Aranaputa Valley peanut butter factory and spoke to the facility’s chairperson, Sonia Sears who  said that the group is currently working on re-branding its products. 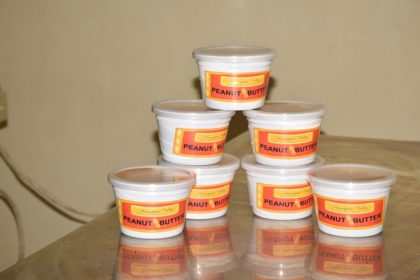 The peanut butter produced at the Aranaputa Processors Friendly Society in the North Rupununi, Region Nine.

The APFS  supplied schools in Region Nine with peanut-butter and cassava biscuits daily but the region’s administration terminated that project. Sears explained that this decision has led to a reduced demand for the peanut butter hence the need to expand.

“In terms of expanding, we are looking at the export market, but at the moment …instead of using the plastic jars, we are looking at using bottles and (re)design the labels …Through a networking group we were able to get training in areas such as bookkeeping, recording and computer training”Sears explained.

Sears said that in 2010 a networking group was formed which included collaboration with other regions.

From then on we started to go to GuyExpo and so you find that people got to know about us…………. since then GMC has been buying and  we have an office in Georgetown and from time to time they will have mini exhibitions andpeople would order nut butter,” she said.

Toshao Adon Jacobus said that the move by the region to reduce the amount of peanut butter supplied to the schools has affected the farmers, who rely on the factory to purchase their peanuts.  “It is affecting the residents in the community, because if the factory has taken off a certain amount of peanuts from farmers, it has been reduced by a big

margin because they are not supplying peanut butter by a large quantity anymore,” Jacobussaid.

In the interim, Toshao Jacobus said that the Village Council is seeking other local markets.

The Aranaputa Processors Friendly Society in the North Rupununi was established by a group of women in 2005, when farmers in Aranaputa were struggling to find markets for purchase their peanuts.

The group started under a thatched roof in the compound of the Aranaputa Primary School. The women purchased peanuts, cassava and fruits from farmers in the community. They then processed  the peanuts and sold salted nuts and peanut butter in and around the community.

Today, the Aranaputa Valley peanut butter factory is one of the most outstanding community projects in Region Nine. Outfitted with modern equipment, the factory has the capacity to produce more than 100 pounds of peanut butter per day. 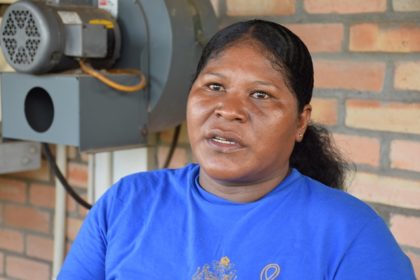 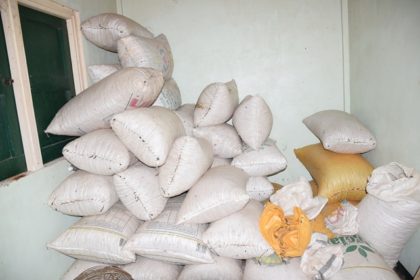 Peanuts in the storage area of the Aranaputa Processors Friendly Society in the North Rupununi, Region Nine. 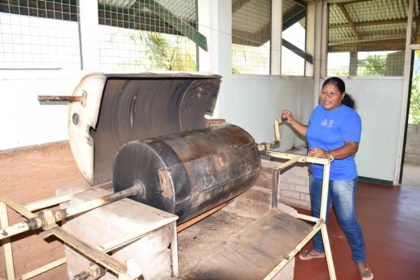 Inside the Aranaputa Processors Friendly Society in the North Rupununi, Region Nine. 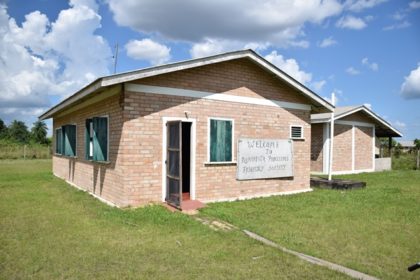