On Thursday, July 27, 2017 at the Ministry of Legal Affairs, the Hon. Attorney General, Basil Williams S.C., MP met with Mr. Peter Pursglove S.C, Consultant, contracted under the Citizen Security Strengthening Programme to discuss issues relating to overcrowding at the prisons. 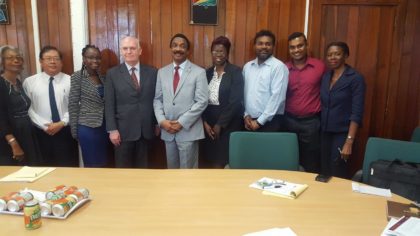 Arising from the discussions were those offences which can be dealt with by alternative punishment. These include fines, reparation and apology, attendance at counseling, education or treatment programmes and general diversion for first offenders and the less serious offences. On the issue of diversion, consideration could be given to police stations being able to filter matters and by so doing, avoid them reaching the magistrates court.

In addition, there were suggestions of bail conditions being relaxed through a Dedicated Bail Act for those minor offenders. This Act would address bail inconsistencies in our courts. And for prisoners who are mentally challenged and still incarcerated, the Government may want to consider having them deferred to a rehabilitated facility for specified treatment.

These recommendations were well received and according to the Hon. Attorney General and Minister of Legal Affairs, greater collaborative efforts will be made among the key stakeholders in tackling the problem of overcrowding at the prisons.