Bartica – Potaro road to be rehabilitated after 20 years

After 20 years, the Bartica/Potaro Road in Region Eight will be rehabilitated. Senior Hinterland Engineer, Ministry of Public Infrastructure, Naeem Mohamed said the road will connect Bartica to Mahdia, “something that wasn’t done for the past 15-20 years.”

In an interview with the Government Information Agency (GINA), Mohamed revealed that most of the critical work will be between 80 Miles and 111 Miles, which is approximately eight miles from the Issano Road junction in Bartica. He explained that bushes will be cleared, corduroy work will be done and lateritic material will be used to fill in the road.

Meanwhile, Minister within the Ministry of Public Infrastructure Annette Ferguson speaking about the project said, “A technical team visited the area and they’re now in the process of preparing the engineer’s estimate. When that is completed, they will go out for public tendering. When we receive those tenders, (they) will be reviewed and forwarded to Cabinet for ‘no objection’ by route of the National Procurement and Tender Administration Board (NPTAB).”

In 2013, the then Regional Chairman for Region Eight, Mark Crawford, noted that  the Bartica/ Potaro Road was deplorable and prevented the flow of traffic in and out of the interior.  The previous administration had acknowledged the need to repair the roadway but nothing was done. “The road will be addressed and bring relief to the residents,” Mohamed said. 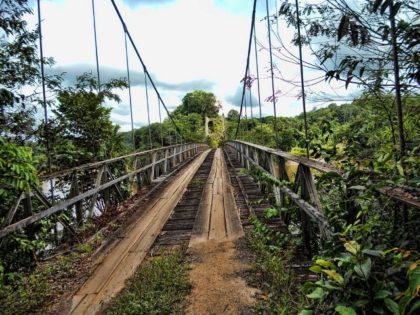 The Denham Suspension Bridge at Garraway Stream; popularly referred to especially by miners as the Cassandra Crossing Bridge, along the Bartica/ Potaro Road will also be repaired. Mohamed explained that the bridge is the main one linking Bartica and Mahdia. “We are currently doing an estimate for the Cassandra Crossing Bridge and examining the best alternative for construction, whether the bridge will be a concrete structure, steel structure and whether it will be a one-span or intermediate span,” Mohamed said.