Bank of Guyana Governor, Dr. Gobind Ganga has reiterated that, Guyana’s economy is strong and the financial system is extremely sound, as he addressed claims that there is a shortage of foreign currency.

At a press briefing this afternoon at the bank, Avenue of the Republic, Dr. Ganga said, “what I want to tell you is that we are currently working with the commercial banks to ensure that there is adequate supply of currency to meet legitimate market demand.” He noted that there are intermittent or seasonal shortages of foreign exchange in the financial system from time to time. 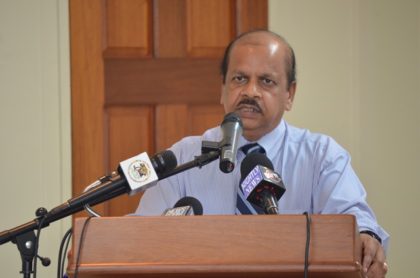 Governor of the Bank of Guyana, Dr. Gobind Ganga addressing members of the media

He further said that, “As of today, we have conducted a market analysis” and findings were that “immediate demand is at a maximum of $6M and this has moved from a working balance excluding commitment from US$10.7M on the 5th December, 2016. Requests for foreign currency at that time was almost nothing, they had a surplus of US$8.3M after the story would have broken (Kaieteur news’ story). We would have had a number of requests, and as a result you will find not all of these requests would have been legitimate demands.”

Today, the Kaieteur Newspaper reported that despite the government saying there is no shortage of foreign currency; commercial banks were advising their customers differently.

The BOG Governor explained that after the demands were made, “We had requested from the commercial banks, invoices to substantiate some of these requests,” however the BOG received “some letters requesting a certain amount or an email for a request.” He said that there has to be an invoice for legitimate demands.

Dr. Ganga added the commercial banks have “made great strides and success in terms of satisfying most of their demands.” The commercial banks are “dealing with this issue as we speak. Some of them will be bringing back foreign currency that they had elsewhere,” the governor explained.

“There was a situation where Banks DIH purchased some shares abroad and there were indeed purchases in the foreign exchange market to satisfy the purchase in terms of provision of foreign currency to buy those shares, and it is not much different from the current demand,” Ganga responded.

The BOG Governor stated that “We have temporarily stop buying Trinidad and today, as well as Barbadian currency from cambios,” however individuals with legitimate transactions for these currencies can check with the Central Bank.

Reporters were urged to be responsible in what messages they portray to the nation, by Dr. Ganga.

According to a recent Kaieteur News article, a number of local banks reportedly confirmed that for the first time in years, they are restricting customers who want to remit large sums of monies abroad to pay for services and goods, among other things. The newspaper claimed that the shortage has been exacerbated by a number of factors, not least among them the severing of ties of a number of foreign banks with local financial institutions.