The Ministry of Social Protection commenced the “Sixteen days of activism” to eliminate violence against women, with an inter-faith service and roundtable discussion today. 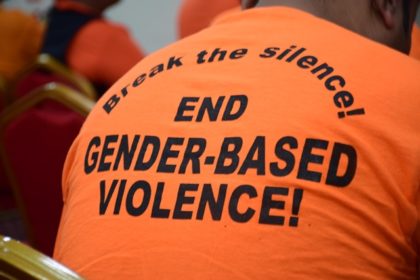 The theme for the campaign is “Orange the world: promoting equality, ending gender based violence.”

In her feature address at the event at the Ramada Princess Hotel, Minister of Social Protection, Volda Lawrence noted that, “Violence has become embedded in our daily routine. We are no longer willing to resolve matters amicably; a dispute is settled with a blow or the flash of a weapon,” as she pointed out that the elimination of violence against women is equally a message for men.

Minister Lawrence called for a change in people’s mindset, and stated that, “in our psyche, violence has become an acceptable way of life, and this is perhaps the reason why our responses are not vocal. We need to initiate the change from within us, and then set about eradicating the prevalence of violence in our society.”

The round-table discussion saw three teams comprising men in one, women in another and children in the third. Persons were able to voice their concerns and possible solutions to aid in the fight to eliminate violence.

The inter-faith service was well attended and there were prayers and messages from the Hebrew, Rastafarian, Muslim, Bahai, Hindu and 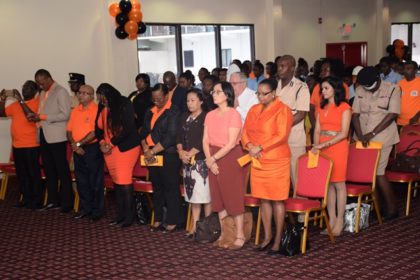 Minster of Social Protection Volda Lawrence, Counsellor for Development Cooperation for Guyana, Ms.Jan Sheltinga, and Minister within the Ministry of Communities, Dawn Hastings-Williams, with other attendees at the inter- faith service

Christian communities. All the religious leaders called for people to join together against violence, for it is against all religions’ principles to hit a woman or degrade her in any manner.

Minister Lawrence also called on women folk not to allow abuse and violence to control their lives. “Speak out against what is happening in the domestic arena; seek support and guidance from the agencies at your disposal,” she urged.

Additionally, the Minister urged women to empower themselves through education and training. “You have the potential to become less susceptible to dependency and violence,” she said. Calling for women to help stop the enactment of violence by arming themselves with the necessary skills and information which are available in their community, the minister stated, “Do not believe that you have to remain in that abusive situation.” 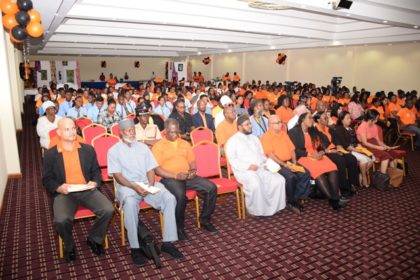 Meanwhile, the Minister noted that, “We will strive towards the achievement of the 2030 Agenda for Sustainable Development with the elimination of violence in all aspects of our society.”

Activities for the Sixteen Days of Activism will see collaboration  with Non-Governmental Organisations (NGOs), and others which include radio programmes,  an art gallery, school outreach programmes; social experiment (street theatre), and self-defence workshop.

Director of Social Services, Whentworth Tanner explained that the activities will be conducted in all 10 Regions.

The Sixteen Days of Activism campaign runs from today, November 25,  International Day for the Elimination of Violence against Women and ends on December 10, 2016 on  International Human Rights Day.