– 61 entrepreneurs get stimulus grants at ‘Govt comes to you’ outreach

– young people commended for their persistence

The Ministry of Indigenous Peoples’ Affairs today disbursed $3M to young entrepreneurs of five Indigenous communities on the Essequibo Coast. The disbursement took place on the sidelines of the ‘Government comes to you’ outreach in Region 2, (Pomeroon-Supenaam).

The youths were drawn from Mainstay, Mashabo, Capoey, St. Denny’s and Bethany. They received training under the Hinterland Employment and Youth Service (HEYS) programme and established businesses including grocery shops, poultry farm and fuel depot among others.

Toshaos of the villages poured praise on the Coalition Government for providing the young people with the tools they needed to become successful entrepreneurs. They said that businesses are operating in the villages like never before.

Toshao Aubrey Francis of St. Denny’s Village said: “We are very thankful to the government for the HEYS initiative. Our youths are benefitting tremendously… businesses are operating like never before.”

He added, “I’ve heard talks about persons bringing in cooking gas for the first time in our village and that is very good, there is also talks about bringing in in motorcycle parts and other groceries.”

Toshao Francis pointed out that this development will reduce the burden of villagers having to travel to Charity and Anna Regina to purchase these necessities. 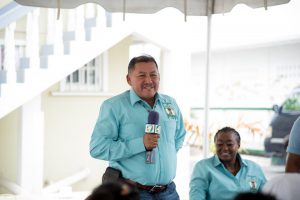 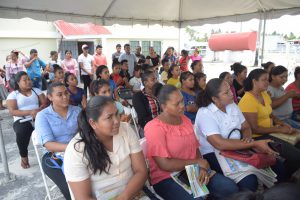 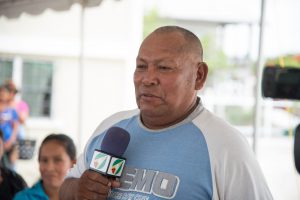 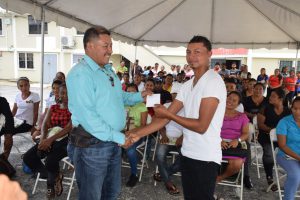 Minister of Indigenous Peoples’ Affairs, Sydney Allicock handing over the grant to one of the entrepreneurs

Mashabo’s Toshao, Silvan Raphael reiterated that the HEYS programme benefitted both the youths and the residents. Years ago, he said, the residents had to travel to Charity to purchase fuel, this commodity is now available right in the village.

During brief remarks, Minister of Indigenous Peoples’ Affairs, Sydney Allicock commended the youths for their persistence.

“You are there as a good example of how others can follow, they don’t have to reinvent the wheel, you were the ones who have tested, made your mistakes, you correct them, you benefitted, some of you just kept on going.”

The Indigenous Affairs Minister recommitted the government to empowering the nation’s youths. He announced that the administration would be recommencing the programme by the end of 2019.

The team will be visiting the villages in the Pomeroon River including Wakapoa, Kabakaburi and St. Monica on Thursday, to continue the distribution of grants to youths in those areas.

The Hinterland Employment and Youth Service (HEYS) programme has, thus far, touched the lives of 4,000 hinterland youths across the country and resulted in the establishment of some 2,000 businesses.