The commissioning of Guyana’s $1.6B Centre for Disease Prevention and Control will forever be etched in the country’s medical memory as a demonstration of the Coalition government’s determination to defeat the deadly coronavirus disease in Guyana in the coming decade and beyond.

This was expressed by His Excellency, President David Granger during his feature address at the facility’s dedication today at Liliendaal on the East Coast Demerara.

The President noted that the administration has made a crucial decision to employ the country’s personnel and deploy resources to protect Guyanese citizens from the disease, while simultaneously advancing public health.

“Today, the establishment of this disease institution represents an urgent investment in safeguarding our people’s health, not only against the coronavirus pandemic but against future communicable diseases,” he added.

Noting that the COVID-19 pandemic is one of the gravest health challenges facing the world today President Granger reminded that since the announcement of the presence of the virus in the country the Public Health Ministry has worked to address this challenge. 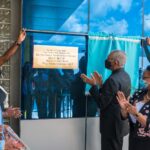 His Excellency President David Granger unveils the commemorative plaque of the Centre for Disease Control and Prevention. Looking on are (right) Minister of Public Health Volda Lawrence and (left) minister of Finance Winston Jordan 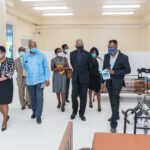 His Excellency President David Granger, Ministers Volda Lawrence and Winston Jordan during the tour of the facility 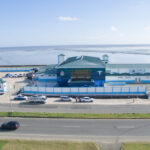 An aerial view of the Centre for Disease Prevention and Control

The Ministry, he said immediately designated three quarantine facilities; assessed the readiness of the country’s health facilities to meet the expected increase in demand on services; developed the local capacity to test for the COVID-19, with training provided by the Pan-American Health Organisation (PAHO)to health-care providers and first-responders.

“Your Government established the National Coronavirus Task Force (NCTF). We published an extraordinary issue of the Official Gazette on 16th March and promulgated a menu of measures based on the Public Health Ordinance for the enforcement of protective measures,” President Granger stated

This, the president explained was then augmented, on April 3, by the announcement of Emergency Measures which included the implementation of a curfew, the closure of the country’s airspace and borders and other restrictions.

“Guyanese,” the President said “can be assured that no effort will be spared, now or in the future, to protect the nation’s health. Every life matters.”

The Head of State thanked the Ministry of Public Health and all who were involved in the establishment of the centre.