A $119Million concrete bridge was officially handed over to the Moruca subdistrict of the Barima-Waini Region. This comes after less than 2 years when a contract was inked to rebuild the wooden bridge that links the Kumaka and San Jose communities in the predominantly Indigenous Region.

“Sustainable long-term projects are what can propel our village economies to prosperity. No more should we settle or accept handouts, but we must demand sustainable projects and that is what the Government of the day has been giving us,” said Toshao Paul Pierre, Vice-Chair of the National Toshaos Council.

Toshao Pierre was at the time speaking at Saturday’s commissioning ceremony of the new San Jose bridge.

He then listed several initiatives that were spearheaded by the Coalition Government that have positively impacted the lives of Indigenous peoples.

Some of these transformative projects include the expansion of Warapoka’s tourism industry, the establishment of the Kwebanna Cassava Processing Factory and the Smith Creek Fish and Crab Meat Processing Facility in Mabaruma. 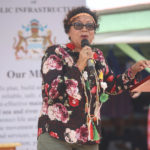 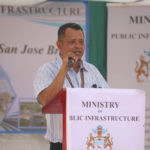 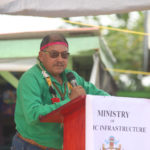 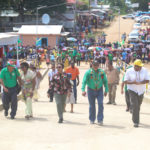 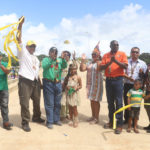 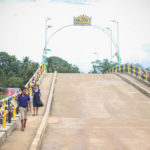 “I urge you to look beyond the small picture of simple travel and see the massive potential that is before you in linking markets and access to more goods and services,” the Minister encouraged.

“This is the development that is based on your needs and your vision and what you ultimately need. This is the type of development we remain committed to realizing,” Minister Allicock continued.

Meanwhile, Minister of Public Infrastructure David Patterson told the residents the bridge’s construction was on the cards prior to the Government assuming office since, while in the Parliamentary Opposition, the APNU-AFC Coalition heard the cries of the Indigenous peoples.

Approximately $53 Million was spent under the previous administration to rehabilitate the derelict bridge. However, its structural integrity was brought under scrutiny since that bridge did not service the communities for more than 2 years.

In issuing his confidence in the new concrete structure, Minister Patterson stated, “I can guarantee you, this bridge will stand here for another 40 to 50 years without any work.”

The San Jose Bridge is bigger and stronger than the former wooden bridge. It measures 385ft long and 27ft wide. The bridge’s high span can now accommodate commuting boats up to 25ft above the water surface.

In addition to an arch that was originally designed by the village council, lights and pedestrian walkways are also key features of the San Jose bridge.