The inclement weather across the coast of Guyana, could not deter what has become an annual tradition for many Guyanese at the Number 63 beach on the Corentyne, Berbice (Region Six).

A family out for the day.

Guyanese from as far as the West Coast of Demerara travelled to the ancient county today to be part of what many described as a spectacular experience; spending time with their families on if not the largest beach in Guyana.

The Department of Public Information (DPI) was there today and was thrilled to be part of the excitement, despite the gloominess of the atmosphere.

We first met up with an eager Nandranie Kissoon, who was anxiously awaiting the arrival of the Guyana Forestry Commission (GFC). She said she was sure she met the criteria for the competition, as she made the kite using the silverbally wood. She was sure too that she would win the competition. According to her, the Easter Celebration will remain a very meaningful time for her and family.

“It’s exciting to come on the beach on Easter Monday, because it is a good reason that Christ is risen and he is risen indeed,” she told the DPI.

Two citizens of neighbouring Suriname were also part of the excitement at the Number 63 beach.

“We came over just to take a look, enjoy and maybe after a few hours we will leave. It is my first time using the boat, but I am really enjoying myself, I like it,” one man, calling himself Star, told the DPI.

Then there was Michael Chung and his family. He said visiting the beach has become an annual tradition for his young family.

“Whether its rain or sun, we are always out here, because Easter is a time for family. We need to get together and experience and give God thanks for giving us another year. We are here too to mix around the people,”.

The Moses family of Albion Corentyne was also part of the beach experience.

Clifton Crandon of Fyrish, Corentyne said the rain prevented his family from coming out much earlier. He said

“When we come here every year, we get fun. Number 63 Beach is just one beach in the whole country. People from all walks of life is here,” he said 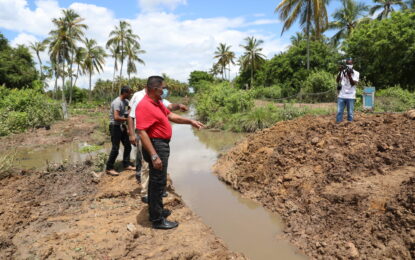 Guyana, Suriname to collaborate on oil and gas...

Guyana and Suriname to review protocols for...

Development plans laid out for Indigenous...

Guyana and Suriname recommit to continued...

Sustainable relief approach to COVID-19 being...

Hinterland communities to benefit from COVID-19...