The Ministry of Education in collaboration with the United Nations Children’s Fund (UNICEF) today, commissioned a study into Out-of-School Children (OOSC) with the aim of working towards achieving equitable inclusive education.

The study commenced today with the launching of a two-day workshop targeting stakeholders in the education sector.

The main objective of the workshop is to share with participants the goals, methodologies and potential results of the study, while building capacity to achieve the agreements of the Ministry and key stakeholders to initiate the OOSCI study; and to create inventory with available data. 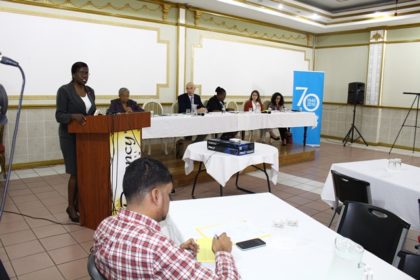 The Global out of School Children Report notes that despite dramatic improvements towards achieving universal primary education, more that 59 million children of primary school age were out of school in 2013. In Latin American and the Caribbean, more than 21 million children and adolescents are out of school or at risk of dropping out. Guyana has not been exempted, as significant disparities exist between and among schools in the urban, rural, and riverine and hinterland locations.

Speaking at the event held at the Regency Hotel, Hadfield Street, the Education Ministry’s Permanent Secretary, Delma Nedd pointed out that in Guyana, the unacceptable drop-out rate, unqualified teachers, especially in the hinterland, and riverine areas, and overall low performance of boys, are the major concerns for the Ministry.

“Currently the country is struggling with data on the causes of drop out and out of school children at both the national and sub-regional levels. This study will set out to correct these issues and bottlenecks caused by the lack of data on out of school children, as well as accelerate efforts towards improving the quality and consistency of reliable data collected through the regional administration,” Nedd said.

She explained that this study is part of the Government’s efforts to address the growing number of dropouts and out of school children across the country, and to ensure equitable delivery of education.

It is estimated that about 16 percent of the projected age appropriate population is out of pre-primary school, and although there are less primary school aged children out of the system, there is a need to address the 14 percent or more that is out of school at the secondary level.  Some children who are enrolled in the system struggle with the consequences of an age gap, for instance, a 2010 survey  shows statistic that more than 600 boys and girls were overage at age 7 with the figure rising to 4, 300 by age 14.

The Permanent Secretary said that the Ministry intends to formulate and implement appropriate   policies to effectively reduce the number of children out of school. “This issue is of high priority for the Government,” she emphasised.

This process, Nedd said, has already started with the implementation of the ‘Five Bs’ programme (books, bicycles, boats, boots and breakfast) and it is anticipated that by September 2016 the  enrollment rate will increase. 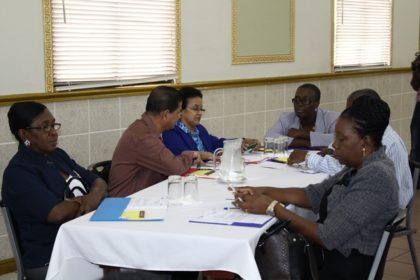 A section of those who participated in the ‘out-of-school children’ initiative workshop at the Regency Hotel, Georgetown.

Meanwhile, UNICEF’s Deputy Representative to Guyana and Suriname, Paolo March lauded Guyana for it efforts in attaining universal primary education and commended the Government for its endeavours in making education more accessible to all.  However, he said that once children are in school, there should a system in place to ensure that they remain in school and receive the quality of education that they deserve.

“Understanding the causes of the issues is (the) key prerequisite to then develop plans and programmes to ensure all children in Guyana can attend school in an inclusive manner…Together with the Ministry and all of you, we can all make sure that the root causes for children out of school or children who drop out are going to be eradicated,” March told the participants.

This study is one of several which have been embarked upon or are scheduled to take in many countries around the world.