Georgetown, Guyana – (February 12, 2018) First Lady, Mrs. Sandra Granger, today, attended the launch of the National Grade Six Assessment (NGSA) App and placed on record, her support to the Ministry of Education and the Science, Technology, Engineering and Mathematics (STEM) Guyana team who have used technology to create a new and innovative way to further strengthen and enhance the learning process. The launch was held at the National Centre for Educational Resource Development (NCERD), Battery Road, Kingston. 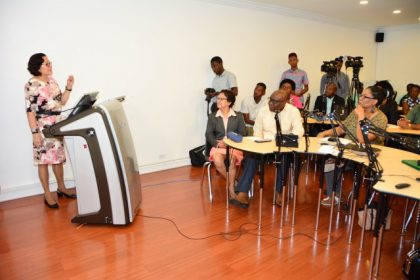 The First lady said that the Ministry of Education has now open doors for children to access education, through STEM and urged parents and guardians to take full advantage of what the Ministry has to offer.

“Our children in Guyana have proven that they have the capacity to learn something new, and it doesn’t matter what school you go to or which part of the country you live in… The Ministry is opening up these apps to you which will help you in your Grade Six exams and hopefully, inspire you to get into robotics and mathematics…,” Mrs. Granger said.

The Ministry of Education and the STEM Guyana team have collaborated to make education exciting for NGSA students. She noted that over time, technology has evolved and likewise, learning must evolve as well.

The First Lady also noted that the app is a great tool that can bring children together, as it allows for the sharing of educational information. Mrs Granger noted that the app has now provided students in the hinterland with the equal opportunity to learn, grow and to develop in STEM, like children on the coast and elsewhere.

“I am excited because I think [this] app is going to [give] that little boost that children need to be inspired and any child can do it, once they have a phone and once they have teachers who are interested,” First Lady said.

Meanwhile, Minister of Education, Ms. Nicolette Henry said that the app was designed with every Grade Six student in mind and they should take full advantage to improve in their academic performances.

“Our nation’s future lies in the ability of our students to master academics as well as vocational skills. The ability to master these skills begins with the compulsory primary education. The Ministry of education is adamant about its objective to improve students’ performance in international and external examinations,” Minister Henry said.

The Minister noted that the Ministry will execute the vision of President David Granger and her personal dream to ensure that every National Grade Six candidate is fully prepared for and is successful at his or her examinations.

Co-Founder of STEM Guyana, Ms. Karen Abrams noted that in order for children to thrive in learning, education must be reimagined.

“We therefore thought that it was important to work with the Ministry of Education to make available, a technology tool which will allow access to test questions, it will allow for explanation to those questions and it will allow answers. A tool that will also allow parents to monitor how long their children study and what they study,” Ms. Abrams said.

Ms Abrams also thanked the Ministry for sponsoring STEM Guyana’s efforts to strengthen the foundation upon which they seek to prepare young people for a future that will be heavily influenced by technology. 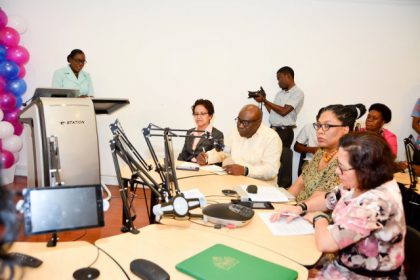 First Lady Mrs. Sandra Granger, seated right, listening attentively to Minister of Education, Ms. Nicolette Henry highlighting the significant strides the Ministry has made in promoting the use of technology in the schools system. This photograph was taken at the launching of the National Grade Six Assessment App today, in the Smart Room at the National Centre for Educational Resource Development (NCERD) at Battery Road, Kingston Georgetown.

“There is perhaps no greater responsibility than the education of the nation’s young people and today, I salute the Ministry of Education for its commitment in empowering our young people through its various technology initiatives and through its support for initiatives like ours,” Ms. Abrams said.

She also thanked President Granger who donated 90 tablets to STEM Guyana to further its research projects in other schools, improving education and the lives of students.

A year ago President Granger, through the National Endowment for Science and Technology (NEST) Programme, announced his Government’s support for the roll out of phase two of the NGSA app during the launching of STEM Guyana’s Mathematics App for NGSA students.

However, the current app now provides students with past papers of the four core subjects, Mathematics, English, Social Studies and Science, which they are tested in at the NGSA Exams. The App also provides an interface, whereby students’ studies can be monitored by their parents and teachers. The App is availablefor download on Google Play Store.

Ms. Uwimana Whaul, a Six Grader of Anais Private School said that she will be using the app to improve in those subject areas she is weak in. “I think this app will help me in my weak areas, especially in Mathematics, it can also help others improve at Common Entrance and I hope it gives more knowledge that would benefit us,” Ms. Whaul said.

Present at the launching were Chief Education Officer, Mr. Marcel Hutson, Director of NCERD, Ms. Jennifer Cumberbatch, members of STEM Guyana, members of Ministry of Education and students of the Kingston Secondary School. 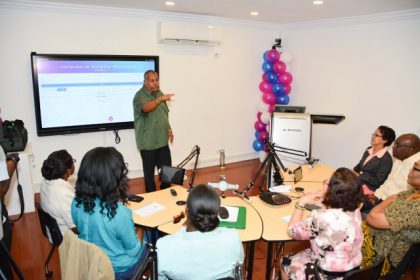 In this photograph, Mr. Colin Sawh is giving and overview of the App and a demonstration of its user friendly interface for students and teachers. 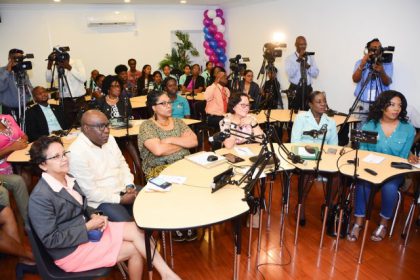