The annual Christmas Awards ceremony began in 1990 and serves to honour outstanding ranks who have done well over the year.

Stuart who is currently serving as the Band Master was awarded a plaque, $250,000 and trips to Aruba, Kaieteur Falls and Arrow Point compliments of the Roraima Group of companies.

Those awarded were commended by Acting Police Commissioner, David Ramnarine and charged to keep improving their service to the nation.

“To whom much is given much is expected, much is required, we have received, are receiving much-needed capacity building in human and material resources. We have to deliver, we cannot expect anything less. We can deliver and must deliver improved performances; that our quality of service improves and that our complaints, in particular, reduce and unprofessional conduct needs to be dealt with condignly and it has to reduce.” 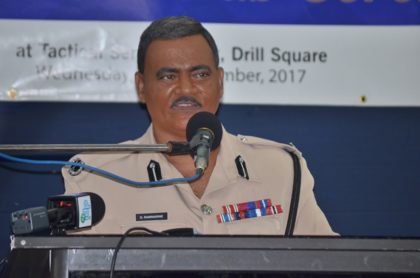 Commissioner Ramnarine also outlined the successes of the various divisions of the force over the past year. He noted that currently, crime is down by ten percent as compared to last year.

He, however, noted that the “percentage of murder remains very high at 72 percent, probably one of the highest in the Caribbean” but that the investigative skills of the Force continue to improve. “We continue to solve serious crimes within hours and days, not weeks and months like before,” he noted.

According to the Acting Police Commissioner, 28 high profiled crimes were solved this year murder amounting to 21, robbery under arms three and one kidnapping, “which you know was not really a kidnapping,” Ramnarine said.

Prizes amounting to $17. 9 M was expended by the Force as remuneration to some 2106 officers and ranks from the various divisions for their exceptional performances, this year. 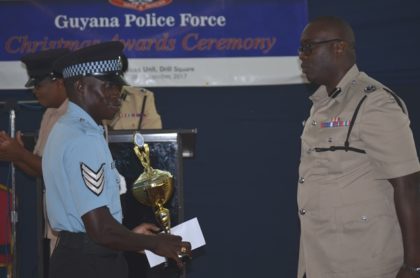 Sports Man of the Year, Winston George is awarded.

Top Brass of the GPF pose with this year’s awardees. 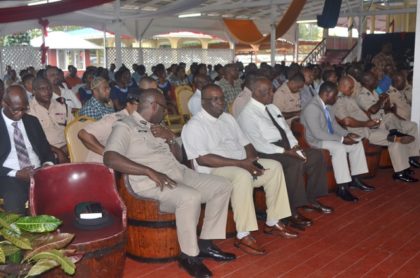 A section of the gathering at the awards ceremony.