The competitive swimmers were filled with confidence when they participated in the twenty-third Goodwill Caribbean 2017 Junior Swim Meet at the National Aquatic Centre(NAC), Liliendaal, East Coast, Demerara, which ran from August 18 to 20, 2017.

The 2017 Junior Swim Meet is a developmental Meet for swimmers 10 and above who missed the qualifying standard for the Caribbean Free Trade Association (CARIFTA) Championship games.

Some of the participants from the Guyana Swim team spoke with the Department of Public Information (DPI) about their performance at the games.

Lian Winter, who competed in the 11 to 12 category, said that she shared her delight at having won a silver medal in the 100 meters backstroke and being able to break the meet record in the race, which will also earn her a present from her mother.

“I am happy about my performance because my mother and I made a deal that if I break the record, I could get a suit and nude cap since I had asked her for some time now. So, I told her the night before the race that should I break the record, would she buy me a new technical suit, which she agreed to and I did it, I am so excited,” Winter enthused. She added that she had hoped to beat Team Bahamas or Trinidad and Tobago, noting that she knew that both teams were ahead of Team Guyana but things can change.

The young swimmer also encourages persons to start swimming because it is a very competitive sport.

Leon Seaton, who also competed in the 11 to 12 category, was happy to have competed in the games since he was able to gain numerous medals and break meet records. He noted that though this was his last year competing in the meet, he was glad to have ended on a winning note.

“I feel really happy to be able to attain these golds and records because this is my last year in this age group and … in the competition. Next year I will be attending the CARIFTA 2018 games (to be) held in Jamaica, once you go to the games you cannot come back to compete,” Seaton explained. 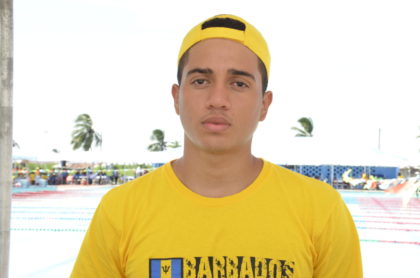 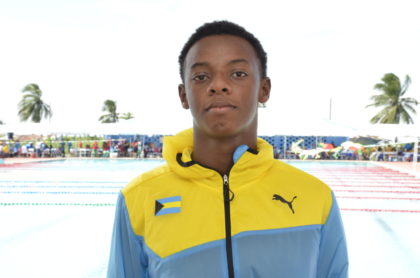 Kristofer Smith, one of the Bahamian swimmers 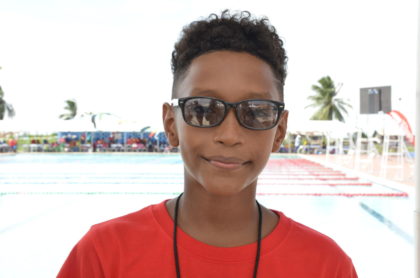 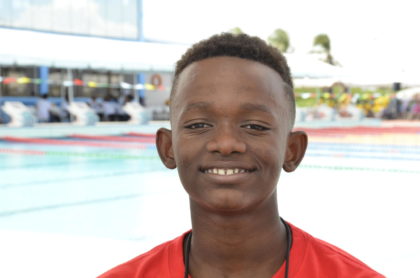 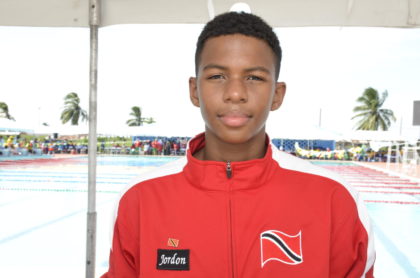 Jordon Mc Millan, one of the swimmers from team Trinidad and Tobago

The young man indicated his intentions to work on his physical(fitness) so that he can be competitive when he competes in the CARIFTA games in Jamaica.

Raekwon Noel, who competed in the 11-12 category, revealed this year was his first time competing in that category and though he received several medals, he found the competition challenging which proved he needed to work harder.

“This is my first year in the 11-12 category and I earned a lot of medals though it was a challenging. Last year I won a bronze medal and decided that I needed to push more if I wanted to break records and win medal but next year I hope to continue since there are persons I would like to defeat,” Noel added.

DPI also spoke to some of the participants from the competing Caribbean teams about their performances and the chance to meet swimmers from different countries whom they all agreed gave them the impetus to train harder for the 2018 Goodwill games.

Kristofer Smith, a Bahamian swimmer, in the 15-17 category said, “The competition this year was really nice and I got more experience due to the competitors from the different countries, since I usually compete with persons from my homeland.” He highlighted that though he was happy to compete with the different swimmers in the meet, the only reason he participated in the games was because of his competitive nature.

Barbadian Kyron Richards, who competed in the 15-17 category was pleased to have participated this year (also his last year to compete) because he would soon be attending college.

“I am a butter flyer (swimmer) so when I participated at the Goodwill swim games last year and I came second, which is my main event. This year I came back to win but I got second again. Although I wanted the gold, I cannot complain because a medal is a medal and though last year was my first time competing and the second this year, I have a lot to be grateful for,” Richards explained.

Jordan Mc Millan, a Trinidad and Tobago swimmer, in the 13-14 category said that, “The games were good for me and I am very pleased with my performance.” He noted that from viewing the competition of the various teams, he realised that though he and his teammates train hard, fellow competitors were doing the same.