Government not to be blamed for the slow progress of Gender Equality, British High Commissioner -Will of the people needed for progress

Guyana has made little progress in the area of Gender Equality over the past two years, according to British High Commissioner to Guyana, Gregg Quinn. 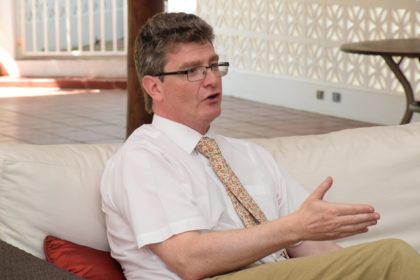 The High Commissioner pointed out, that it will ultimately be up to the people of Guyana to take a stand against “something which is fundamentally wrong on so many levels.”

From an economical view, Quinn said a country cannot develop if fifty percent of the population find themselves in submissive positions.

In a 2016 the Guyana Chronicle report, the Commonwealth in its fight for gender equality recommended that Parliaments in Commonwealth countries should have a one-third composition of women. Guyana’s Parliament has 34 percent female occupancy.

In June, 2017, The Women and Gender Equality Commission made 22 recommendations, during the presentation of the fifth and sixth annual reports to the Speaker of the House Dr. Barton Scotland.

Some of the findings presented were the enactment of legislation and policy on sexual harassment in the work place, censorship of songs that are deemed ‘inappropriate’ and ‘degrading’ to women, promotion of parenting skills and training in pre-and postnatal clinics in all health centres, initiation of the pilot progammes for the establishment of counseling centres and friendship benches in communities which target victims of domestic violence and depression among others.