Georgetown, Guyana – (August 25, 2017) Commander-in-Chief, President David Granger, this morning, congratulated the troops of the Guyana Defence Force (GDF), who participated in the two week-long Field Tactical Exercise (FTX) ‘IRONWEED’, noting that the exercise has served to reaffirm and reassure the Defence Board and the people of Guyana, that the Force is always ready to fulfil its mission to protect Guyana’s territorial integrity and is in a state of preparedness for any security threat, which may arise, even as Government continues to make significant investments in re-equipping the force. In addition to this Exercise, the Force is currently engaged in two major operations; ‘Operation Clean sweep’, which is aimed at recapturing the four prison escapees still on the run and ‘Operation AXEL’, which is focused on border deployment and protection.

The Head of State made these comments after witnessing the ‘final attack’, along with acting Prime Minister and Minister of Foreign Affairs, Mr. Carl Greenidge, Minister of State, Mr. Joseph Harmon, Minister within the Ministry of Communities, Mrs. Dawn Hastings-Williams, Chief of Staff of the GDF, Brigadier Patrick West and other senior officers at the Colonel John Clarke Military School (CJCMS), Tacama, Upper Demerara-Upper Berbice (Region Ten). The exercise commenced on August 11, 2017 with the final contingent of troops moving into the Exercise Area located in the jungle and savannahs of Tacama, East Berbice-Corentyne (Region Six).  The Exercise is designed to assess the GDF troops in Close Country Warfare (CCW) and Open Country Warfare (OCW) simulations of battle. 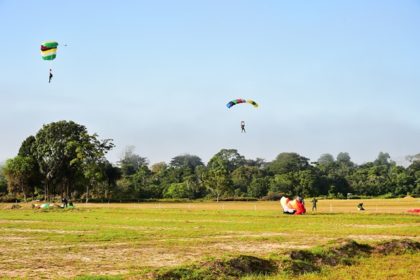 The Commander in Chief told the troops that “military service in Guyana is being transformed. This exercise and this training course are very important. They are important because they signify the rite of passage of the people who are called upon to defend this country. We have challenges to face in Guyana and the biggest challenge is the security of our borders. This exercise is an exercise dedicated to ensuring that Guyana is ready to protect its borders and this is something that you must never forget. Guyana has over 3000km of borders and we are a small population but in protecting our borders, we have to ensure that we have the mobility and the correct deployment so that every part of our borders would be secured.”

With the recent discovery of a twin-engine Beechcraft aircraft in Upper Takutu-Upper Essequibo (Region Nine) on August 13 and another abandoned aircraft in September 2016, just miles away from the area, President Granger said that is it important, now more than ever, that Guyana takes the necessary steps to protect its borders.  In addition, the Head of State pointed out that the GDF is also responsible for helping to protect Guyana’s natural patrimony.

“We have to protect our fragile environment. People can come across our borders with road building equipment [unknown] to the centre, build airstrips and maybe get Guyanese to collaborate with them to remove our precious minerals and other commodities so the GDF has to take on a greater role in protecting our territory and protecting our environment from degradation and from despoliation. We have to prevent illegalities throughout the country,” the Head of State said.

To demonstrate its commitment to the protection of the Guyanese citizens and the country’s assets, President Granger said that the Government and the Defence Board have been working with the GDF to ensure that the steps are taken to equip the service members with the tools that they will need.

The President said that the Government is re-establishing the Guyana People’s Militia in every region across the country since it believes that more vigilance is needed, particularly in the border locations. “One of the things that we have embarked on already is to ensure that the People’s Militia is trained and deployed to every region. Every region will have a company or a battalion of the People’s Militia. I have also asked the Chief of Staff to consider converting the coastal battalion to a border battalion so that we can deploy more troops on the borders and internally. I have also asked him to consider the reintroduction of mounted troops so that every graduate of the Colonel Ulric Pilgrim Officer Cadet School and the Colonel John Clarke Military School, who choose to do so will leave their training course able to ride horses to conduct patrols in the hinterland of Guyana,” he said.

In 2015, during a meeting with the members of the GDF at Base Camp Ayanganna, where he had announced the Total National Defence Policy, the Head of State had had committed Government’s support to the re-organisation and strengthening of the GDF on five pillars; personnel, readiness, infrastructure, morale and equipment with emphasis on the Air Corps, the Coast Guard and the Engineer Corps.  The re-equipping process has begun and following the final attack, President Granger reviewed a display of new field equipment, which has been acquired by the force.  This included a combat support field medical hospital and communications apparatus.

Lieutenant Commander Roger Nurse, who briefed the President on the communications apparatus, said that the ranks and officers of the Force were better equipped this year while they were in operational mode due to the acquisition of the new equipment. Additionally, the Force was able to utilise its collapsible drone to conduct aerial reconnaissance, during the exercise.

Meanwhile, Major Natoya Fraser, a physician at the Force’s Medical Corps, provided the President with a tour of the new field hospital. Major Fraser said that during the exercise, she was able to treat all injuries including lacerations from that facility. The field hospital also boasts a well-equipped dentistry, which can provide services such as the extraction, cleaning and filling of teeth.  Further, the President was able to take a first-hand look, at new types of combat and operation meals, which are now, for the most part produced in Guyana, using local food items.

Minister Harmon, who serves as the Secretary to the Defence Board explained that this year, the Army has been better equipped as the Government is working with local and international partners to build capacity and strengthen security.

“The equipment, which you saw here this morning has marked an improvement over what we had in 2016 on the exercise. Today you saw some improved equipment so far as our communication is concerned. We have some radios with the capacity to be able to do texts; to do data. For the medical corps, we have seen a field hospital, which included a dentist and full dentistry and a triage areas and the other areas so we are able now to actually deploy medical facilities and medical personnel from the brigade down to the battalion. We can deploy medical facilities down to the company and right down to the level of the platoon,” he said.

The State Minister also said that the final attack of Exercise ‘IRONWEED’ showcased an improvement in the combat readiness of the GDF to operate in the various terrains of the country such as open country, close country and jungle.  President Granger added that mastering the country’s various terrains will increase confidence in Force readiness.

“The most important lesson you can take away from this is the need to protect your territory, our country. Without your vigilance, your effort, your expertise this country will not be able to sleep safely at night. We have islands in the Essequibo River and three of those islands are bigger than the British Virgin Islands. We have wetlands in Canje and elsewhere. We have highlands, some covered with clouds, grasslands, you have lakes in the Essequibo, you’ve got rainforests, you’ve got rivers and rapids, but you; the soldiers of Guyana, have got to be able to operate all of those terrains by day or by night, whether the sun is shining or the rain is falling. That is why you must train rigorously and regularly and I never want to hear again that the GDF passed a training year or cycle without a major field tactical exercise,” he said.

Chief of Staff of the GDF, Brigadier Patrick West said that the lessons of Exercise ‘IRONWEED’ must be utilised to further improve operational efficiency. “The GDF, as we continue to evolve, will continue to practice not only in this area but other areas to ensure that we build proficiencies in every area. We hope that the force can do total deployments in the close country operations and total deployments for internal security operations, which are exercises that are planned differently. As we build the model of exercises for future years, we will further expand our platoon company and battalion training with more emphasis placed on the operational skills of the soldier,” he said.

Exercise IRONWEED follows last year’s successfully completed Exercise HOMEGUARD, which was conducted at the same location. These Exercises are all part of the continuous training for the Officers and Ranks of the GDF, and are also designed to enable them to test theories and develop new strategies related to how OCW and CCW can best be executed. 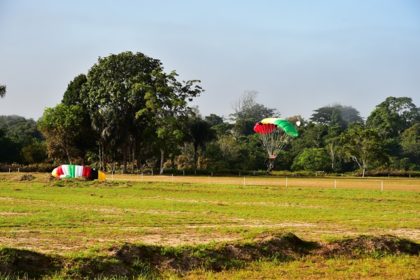 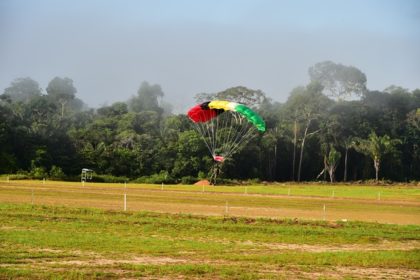