President David Granger is convinced that Guyana could produce partially every commodity that is required in the hospitality industries in the Eastern Caribbean. “Every egg, every avocado pear, every fish, every pakchoy, bora anything that we want, tomatoes, (can be produced right here)”, the President said. 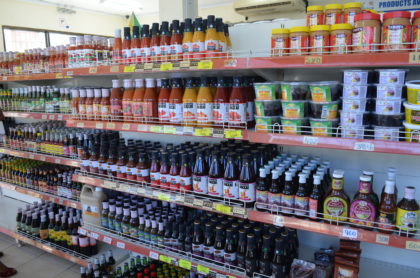 Some of Guyana’s locally produced products which are at the Guyana Shop, Robb and Alexander Streets.

The President was at the time speaking on his weekly programme Public Interest, where he said that the “buy local, eat local” policy is part of the government’s Green Economy Initiative.

President Granger says that the government needs to encourage the population to understand that there are healthy local foods in Guyana that are grown right in Guyana; this he notes is the first step towards  ensuring that the country starts to support local producers.

The President notes that Guyana has tremendous potential to produce quality food without any chemicals or additives which is present in other countries. “If the people understand (this concept) the people will demand fresh foods, fresh meats fresh vegetables I think that’s the first step”, the President said.

The second step the President says, relates to the manufacturing sector. The President notes that companies should try to move away from importing products that can be grown and produced here. He also pointed out that government would like to see the manufacturing sector understanding that many local farmers can produce the commodities (raw materials) they need to produce their products.

President Granger however notes that Guyanese need to move away from the foreign mentality when it comes to consumption of products and once this happens, progress will be made.

Recently, Minister of Business, Dominic Gaskin, called on Guyanese to consume more local produce. He pointed out that it is the responsibility of the government to provide an enabling environment for business to thrive but consumers also have a great part to play, by buying and consuming locally produced and manufactured items.

Minister Gaskin said that buying and consuming locally produced products not only provide citizens with health benefits but promote the economy as well. “Every time I have a small portion of rice, I feel like I am doing something good by consuming local production especially when there are choices,” Gaskin said.