Guyana will for the first time host the 2018 International Civil Aviation Organisation (ICAO) Air Transport Conference; a significant responsibility it has earned following the improvement in its compliance with ICAO. 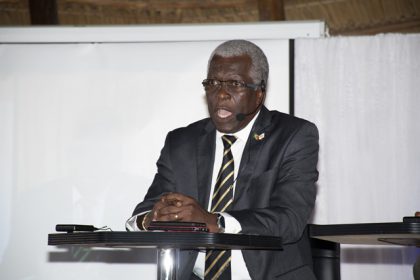 The five-day conference, which will be held in November later this year, was officially launched today at the Umana Yana, Kingston Georgetown.

Director General of the Guyana Civil Aviation Authority (GCAA) retired Lieutenant Colonel Egbert Field said that ICAO has recognised the transformation in Guyana’s aviation sector, particularly the tremendous support it has received from the government over the past few years through the Ministry of Public Infrastructure.

It was as a result of this, approval was granted by the international air regulatory body for Guyana to host the much-anticipated event.

“Guyana has been moving very, very strongly upward in the ladder of compliance with ICAO, and ICAO has recognised this. ICAO is looking at Guyana as one of the model countries,” the Director-General told the packed auditorium which included Ministers of Government and members of the Diplomatic Corps.

It was in November of 2017, that Guyana was awarded the ICAO presidential certificate for being one of the 12 most improved states in the world in the sector of aviation.

“This is what the Council and President have seen. They see the promise, they see that there are a number of priorities that the government is placing emphasis on. They said it is time for Guyana to be taken up the ladder and be held for the world to see,” Fields said.

Minister within the Ministry of Public Infrastructure Annette Ferguson.

Meanwhile, delivering featured remarks at the media launch, Minister within the Ministry of Public Infrastructure Annette Ferguson stressed the integral role air transport plays in the aviation industry. She noted that more than 80 percent of persons navigate between Guyana and the rest of the world by air; hence its importance should not be undervalued.

According to Minister Ferguson, air transport supports a variety of sectors and activities including agriculture, forestry mining, tourism and social services and therefore contributes significantly towards the development of nations.

“Air transport is vital to global development. ICAO estimates that the aviation sector has directly and indirectly supported over 67.3 million jobs worldwide and contributes approximately US$2.7 trillion to the global economy. So, the magnitude of the impact tells you how critical such an industry is toward economic development.”

A section of the audience at the conference.

By: Alexis Rodney and Ranetta LaFleur